From Springbok lock to Super Rugby coach, 'Ackers' has come a long way. 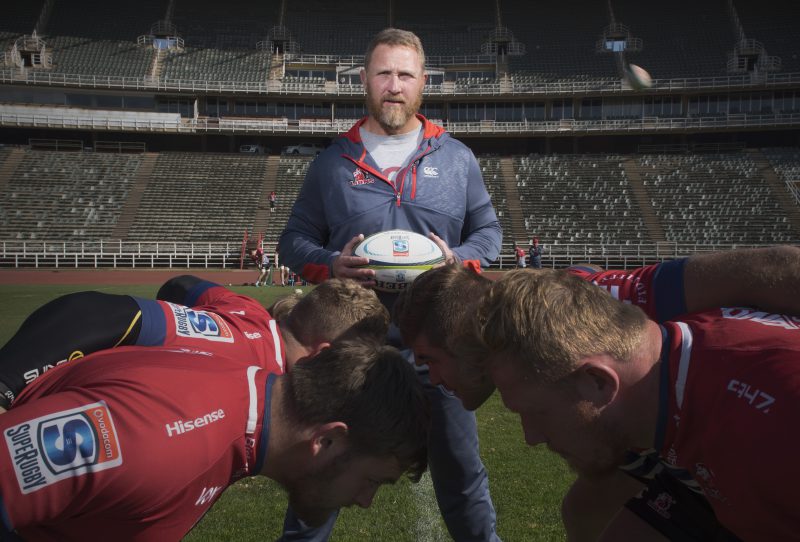 Lions coach Johan Ackermann tries to capture the mood of a serious training session. It turns out that's a bit of facade... Picture: Refilwe Modise.

Widely recognised as the “saviour” of Lions rugby, coach Johan Ackermann is an overwhelming person at first sight.

His towering body and big frame can be very imposing, not to mention that steely glare that seems to look right through you.

The picture is completed by the bushy beard, which isn’t by choice but actually originated from a “friendly bet” he lost to his players.

But who is the person behind this gladiatorial figure? To start with, he has little time for anything outside of rugby, apart from his family and being a devout Christian.

“And maybe going to a movie,” he added in a caring voice in stark contrast to the tough exterior.

Despite being a hugely popular public figure in the midst of the Lions’ tremendous success, the 47-year-old remains a very private person when it comes to his family and his own achievements and will always credit the players and the management at the Lions.

“Coach Ackies” as the players affectionately refer to him, is married to wife Crystelle and they have three kids – Ruan, 22, a Lions player, Tian, 18, and Zilce, 16.

And he admits that giving up his other family – his beloved Lions – was a very difficult decision to take after he accepted the coaching job at English club Gloucester after the Super Rugby season.

“It wasn’t easy and not just a oneday thing, but the decision will hopefully enhance me as a coach,” said Ackermann.

“That was the main reason for it, because I haven’t been this happy before.

“I will always be thankful to the Lions for giving me this opportunity,” he added, referring back to late 2012 when he was promoted from forwards coach to head coach after John Mitchell left the team following a fallout between players and the Kiwi mentor.

But despite Mitchell’s controversial methods which resulted in players’ unhappiness, Ackermann says he learned from anybody and everybody on his long road to stardom which eventually resulted in three straight SA Coach-of-the-Year awards.

His list of accolades also includes Currie Cup winner’s medals as assistant coach in 2011 and as head coach in 2015.

He experienced his first coaching stint as a player with Northampton Saints under All Black backline coach Wayne Smith.

After that, former Sharks and Lions coach Dick Muir pulled Ackermann into his academy in 2009, which opened doors for him as future Lions forward coach.

“I learned a lot from both Dick and Mitch which I managed to take forward with me, but at the same time I started implementing my own ideas,” said Ackermann.

He recalled the bitter disappointment of four years ago when the Lions were kicked out of Super Rugby. But under his guidance, their comeback has been nothing short of spectacular.

They announced their return by recording a record seven wins in 2014, followed by nine in 2015, qualifying for the final in 2016 and then winning 14 from 15 this year, including another record 12 straight wins to top the overall 18-team log.

And although today’s Super Rugby quarterfinal against the Sharks at Ellis Park could be his last in charge, he will undoubtedly leave a legacy for successor Swys de Bruin in seasons to come.

Besides his coaching success, Ackermann also enjoyed a successful career as an uncompromising lock, winning 13 Test caps for the Springboks.

After being schooled in Brandwag in Benoni, he joined the Police College in Pretoria and he was known for being a “meanie” not standing back for anyone in the tough world of Carlton Cup rugby.

He went on to make his debut for the Blue Bulls in 1996. In 1999 he played for the Lions, followed by stints at Northampton Saints and Griquas before joining the Sharks in 2004.

The last game of his playing career fittingly came at Loftus Versfeld in 2008, resulting in a 29-15 win for the Sharks. Ackermann still lives in Pretoria and takes the N1 Ben Schoeman highway daily before sunrise and returns after sunset.

“It was and always will be a pleasure coming here to Ellis Park,” he said.

“So it was a rugby decision to opt for Gloucester. And hopefully I experience something different in other competitions and one day I can put that experience back into South Africa.”

And the beard? “I challenged the players after we lost early in the campaign to the Jaguares that I won’t shave it off until we lose again. It’s been 12 matches …”

And the beard could still reflect a magical 15 over the next two weeks should the Lions go all the way.