After building a new desalination plant in Richards Bay, a Ballito company has been appointed to begin construction on another on the Dolphin Coast, reports the North Coast Courier.

Solaqua Holdings will break ground on the new plant at the Blythedale Coastal Estate – currently being developed – next week, and says it expects the first stage to be completed in two months. The plant will be able to produce between eight and 10 megalitres of clean water every day from seawater.

The company completed their Richards Bay desalination plant in April this year after an eight-month construction and Solaqua director Mandla Mayise said the plant would help the city deal with the effects of the drought. “We have 10 one-megalitre units at the Richards Bay site, meaning we can produce about 10 million litres of clean water every day,” said Mayise.

What makes this plant unique is the desalination units are built inside large, partially portable containers. If necessary, more can be added to increase capacity, and they can even be split and moved to cover other places in need of water.

Solaqua have also introduced fully portable container desalination units that can be loaded on to the back of a truck and taken to, for example, disaster areas where clean drinking water is needed.

The Blythedale plant will also be built using these new units, which will go online in stages as the development of the resort continues. Blythedale Coastal Estate development director Andrew Thompson said sourcing water was a key element in their green-living philosophy.

“Located on the coast, we are fortunate to have desalination as such a viable option,” Thompson said.

Solar energy from photovoltaic panels installed on residences will be used to power the plant, so that more desalinated water than is required will be generated during sunlight hours and stored in a reservoir. Water will then be piped to the houses during the night from the reservoir, which will be filled up again during the day.

Currently, the plant is planned to provide water specifically for residents of the estate. However, Mayise said the possibility exists that in future, water produced above and beyond the estate’s needs might be pumped back into the public reticulation system.

Mayise explained that after seawater had been pumped to the plant it was sent through reverse osmosis filters to remove all salt, minerals and other substances, leaving the water completely pure.

“Of course, water without any minerals tastes very flat – so after the water is 100% purified we reintroduce certain minerals before it is pumped into the reticulation system.”

He said their desalination units in containers allowed plants to be erected much quicker than before.

“When a drought is making water scarce it is no use building a plant that will take years to finish.

“This is just another reason why our plant is uniquely suited to meet South African needs.”

The only byproduct of the desalination process is brine, which is pumped back into the ocean. According to Solaqua an environmental impact assessment was performed when the plant was constructed, which found that the normal salt content level in seawater (0.004%) will not be affected by the brine.

The plant produces approximately 1 000 litres of water at a cost of only R6 and, according to Solaqua, is 42% more efficient than desalination plants of a decade ago.

Each megalitre (million litres) requires about 200KW of electricity to produce.

“Desalination is seen as a pipe dream, or prohibitively expensive but – if done properly – it can be a useful solution to SA’s ongoing water crisis,” said Mayise. 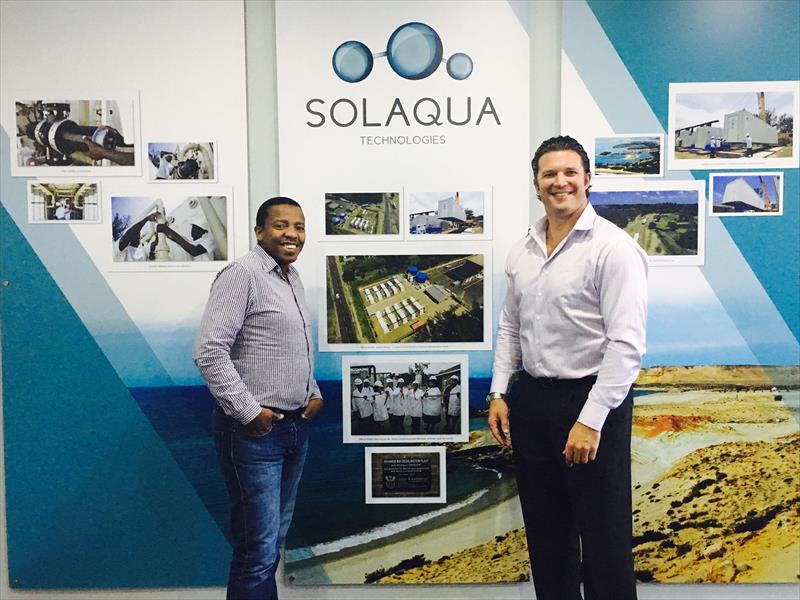