The city said it would look at paying the outstanding salaries as soon as possible. 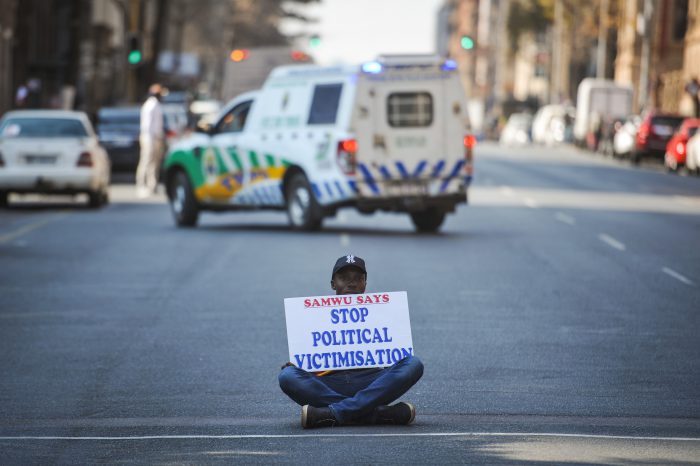 A SAMWU member sits in the middle of the road during a march from the old Putco bus depot in Marabastad to Tshwane House, 27 July 2017, SAMWU members were protesting against unilateral decision making by the mayor Solly Msimanga without consulting the workers, Pretoria. Picture: Jacques Nelles

They said the city had failed to pay them their salaries since December and had been making decisions without consulting them.

This after 2 000 officers completed their required training in November last year, before graduating and being absorbed as constables.

However, the officers say they were instead deployed as security officers following a termination of contract between the city and security companies in June.

They also did not receive their upgraded salaries for the past seven months, Samwu regional secretary Mpho Tladinyane said.

“These workers will not work as security guards, because the city has not consulted them on that matter.

“All those already posted as security guards must be withdrawn as processes were not followed,” he told The Citizen.

He said the officers were deployed in various municipal regions and premises to get the feel of TMPD duties.

“We have received all their issues in a memorandum and we will look into each one of them to see how they can be resolved. We can also confirm that they will receive the money due to them.”