The couple's expert witness from the US only flies first class and was made to wait pointlessly in court yesterday. 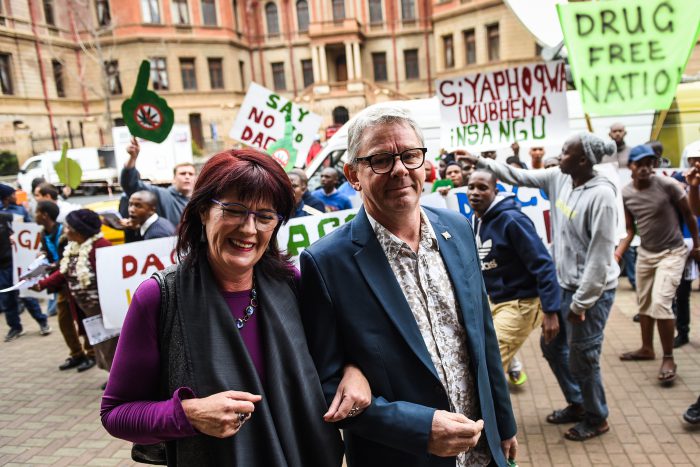 It would appear that the state’s strategy was to cripple the pockets of the “Dagga Couple” following an application to strike off expert witness evidence.

The “trial of the plant” failed to commence yet again before the High Court in Pretoria yesterday.

Jules Stobbs, one half of the couple, believed the state’s last-minute application to remove parts of the defence’s evidence was a ploy to affect the cannabis activists’ finances.

Stobbs and Myrtle Clarke had asked the court to legalise the use of marijuana. But three days into the trial, the state opposed several summaries of evidence by the defence witnesses, stating some aspects of their testimonies were not relevant to the case. This included an article on pregnancy among middle-class women and the industrial use of hemp, state advocate Leah Gcabashe SC said.

“That again is an article that the defendant knew has very little to do with the constitutional challenge of drug use. The last category speaks of the medicinal use of cannabis. There has been a Medical Innovations Bill in parliament since 2014, which made provision not only for medicinal use, but of commercial and industrial use of cannabis. That category is currently in court … and ought to run its course,” she said.

Defence advocate Don Mahon SC called the state’s attempt “vexatious” as it had 10 months to object to the summaries of evidence. “This is vexatious because of lateness. This application ought to be dismissed.

“They [state] themselves are guilty of various complaints that they have raised.”

The defence’s expert witness, oncologist and professor of clinical medicine at University of California in San Francisco Dr Donald Abrams, sat quietly in the court as his scheduled testimony yesterday was not heard.

The expert was meant to give evidence about the use of cannabis as a safe treatment for many serious conditions, while outlining the lack of scientific proof on harmful results.

But after three days of sitting in court without taking the stand, Abrams will have to fly back to the US this weekend, Stobbs said.

“We are severely compromised. Because the state has been vexatious and stalling, we are asking for costs to send him home as we have to bring him back. We tried to change his flight yesterday and it was R132 000, as it is a first-class ticket to Los Angeles.”

Stobbs and Clarke stand accused of possession and dealing in marijuana in 2010, but their case had been delayed by their bid to legalise the use of the plant. – rorisangk@citizen.co.za

Solidarity to UCT: Scrap mandatory vaccinations or see you in court
1 hour ago
1 hour ago

'It was just awful': Centurion man stung over 500 times by bees
4 hours ago
4 hours ago
PREMIUM!

Solidarity to UCT: Scrap mandatory vaccinations or see you in court
1 hour ago
1 hour ago

'It was just awful': Centurion man stung over 500 times by bees
4 hours ago
4 hours ago
PREMIUM!