Holomisa says Maimane's plan is 'a big no', while Cope leader Mosiuoa Lekota says his party 'absolutely' does not support the call. 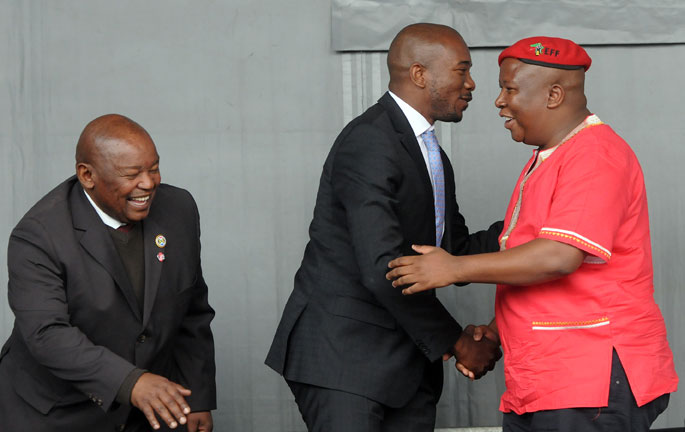 EFF leader Julius Malema has responded to the DA’s announcement that it would table a motion to have parliament dissolved and call for an early election following the no-confidence motion in President Jacob Zuma on Tuesday.

“Section 50 of our Constitution states that the president must dissolve the National Assembly if the Assembly has adopted a resolution to dissolve with a supporting vote of a majority of its members, and three years have passed since the Assembly was elected,” the party said.

The motion will be tabled in parliament today, and will be debated and voted on “as soon as practically possible”, said the DA.

It further called on ANC MPs, presumably the ones who voted against the president on Tuesday, to vote in support of the motion to dissolve parliament.

The EFF leader has, however, called the DA’s statement “bluff” as he claims it does not need a motion to dissolve parliament.

Earlier this year, Malema said he had approached Mmusi Maimane and suggested they combine EFF and DA MPs to resign from parliament and have it dissolved.

“I went to the leader of the DA, and said to the DA leader: ‘If we combine the EFF numbers and the DA numbers and we resign from parliament, that thing is no longer properly constituted as parliament. But that strategy will still come if we’re still weighing our options, if we’re still fighting from within.

“And maybe at the end of  everything else, we may come to a conclusion that parliament must resign, and once parliament doesn’t reach its quorum as prescribed in the constitution, then we can approach the Constitutional Court to go and instruct speaker Baleka Mbete to dissolve parliament,'” he said at the time.

According to Section 46(1) of the constitution, parliament should have no fewer than 350 and no more than 400 members. There are currently 398 living members of parliament, including 89 from the DA and 25 from the EFF.

This means, Malema says, the DA has more than enough MPs to sacrifice and declare parliament unconstitutional, with the party only needing to quit 49 of its members to achieve that.

Tabling a motion only shows that the DA is bluffing, according to Malema, who said it could dissolve parliament without tabling a motion.

If his party had enough MPs, it would do it alone, he said.

“You don’t need a motion DA, you can do it alone. If EFF had more than 51 members, we were gonna do it alone. Stop bluffing,” he said.

UDM leader Bantu Holomisa said Maimane’s plan was “a big no”,  while Cope leader Mosiuoa Lekota said his party “absolutely” did not support the call.

U don't need a motion @Our_DA, you can do it alone. If @EFFSouthAfrica had more than 51 members, we were gonna do it alone. Stop bluffing pic.twitter.com/lD3hnlkOKu

Constitutional law expert Professor Pierre De Vos earlier this year, however, said that Malema’s plan to have the opposition quit parliament was “misguided”.

It would not lead to a new election and a sixth democratically elected parliament, as the ANC still possessed a more than 50% majority in the National Assembly, and so would continue to govern, but without the counterbalance of an opposition presence. He said that just because the opposition had quit would not mean that the House was constituted unconstitutionally.

Malema suggested at the time that many within the ANC (the “moral people”) may also quit in support, which might drive the ANC’s presence to below 50% and thus spark a new round of national elections.

De Vos said it was highly unlikely Malema’s plan could pay off, as a majority of MPs would actually have to vote for early elections.

“That is not going to happen because the ANC has a majority.” A vote of 201 out of 400 would be required.

De Vos said that if the EFF and other opposition parties quit parliament, there would be a crisis of legitimacy, but parliament “will go on, albeit in a way that is less legitimate”.

“Constitutionally it’s not going to make any difference whatsoever. Parliament only needs one-third of its members to form a quorum. It needs 50% of its members to pass legislation … and the ANC has that majority, so that’s going to continue.

“Many voters will wonder, is parliament legitimate with only one important party present. It’s a political issue, not a legal or constitutional one.”

He said smaller parties would lose their influence in portfolio committees if they quit.

“I really have no idea why [the EFF] are proposing this. It seems to me that if they are of the feeling that if they just walk away there will be a new election, then they are misguided and they don’t know what the provisions of the constitution actually say.”

Malema: South Africa, we told you so