Imtiaz Cajee has made it his life’s mission to discover the truth about his uncle’s death in police detention 46 years ago. 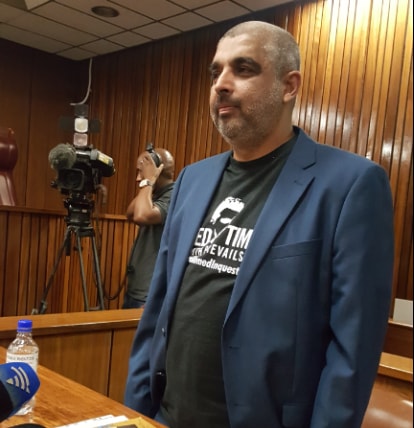 Anti-apartheid activist Ahmed Timol’s nephew has called for the establishment of a special team of investigators to look into the deaths of apartheid-era detainees.

Imtiaz Cajee, a member of State Security Agency, has made it his life’s mission to discover the truth about his uncle’s death in police detention 46 years ago, and has been the driving force behind the reopening of an inquest into Timol’s death.

He has also called for the erection of a statue and the opening of a museum at John Vorster Square to honour all those who had died in detention under the apartheid government and for the declassification of all files pertaining to political detainees.

A magistrate ruled in 1972 that Timol had committed suicide by jumping out of a 10th-floor window at John Vorster Square, where he was being interrogated by members of the security police.

Cajee said his family had always believed the first inquest had been a scam to cover up his uncle’s torture and murder.

He testified that his uncle’s death in 1971 and the overnight disappearance of Timol’s brother, Mohammed Timol, had a devastating impact on him, his grandparents and the rest of the family.

He said the security police had relentlessly harassed the family until 1989 to try to force his uncle Mohammed to become a police informer, despite his brother’s death in detention.

Cajee was the one who had convinced his grandmother to testify before the Truth and Reconciliation Commission in 1986. He was so filled with emotion on hearing her evidence that he made a vow to do something constructive to preserve his uncle’s legacy and expose the full truth behind his death.

It was at that stage that Cajee started his own investigation, reading old newspaper cuttings and speaking to many former political detainees who were tortured in custody and the families of those who died in custody.

Cajee revealed he had contacted one of his uncle’s interrogators, Captain Hans Gloy, but Gloy insisted allegations that his uncle had been tortured were a “bunch of lies”, that he had no reason to apply for amnesty because Cajee had no case against him.

He said he was very disappointed when the NPA’s priority crimes unit informed him in 2006 their investigations had produced “negative results” and that the case had been closed.

His further investigations subsequently revealed that something more sinister was going on and that a secret apartheid government task team had been formed to explore ways of avoiding the state’s responsibilities to prosecute offenders denied amnesty by the TRC.

He stressed that the families of Nokuthula Simelane and the Cradock Four, who also died in police custody, were still waiting for justice, with Simelane’s family being forced to get a court order to compel the police to finalise their investigations and the NDPP to make a decision.

Cajee said the Simelane investigation had disclosed gross political interference in the operations of the NPA and explained how political cases from the past were deliberately suppressed.

Cajee first contacted TRC commissioner Yasmin Sooka in 2009 to discuss his uncle’s case and finally arranged a meeting in 2015, where the family agreed to appoint Frank Dutton to investigate the case.

The present national director of public prosecutions, Shaun Abrahams, finally agreed in January last year to reopen the inquest on being presented with new evidence.

The inquest will continue on Wednesday.