How the Marikana massacre gave birth to the EFF

The EFF leader says he had given up all hope of making a political comeback in 2012 when the massacre happened. 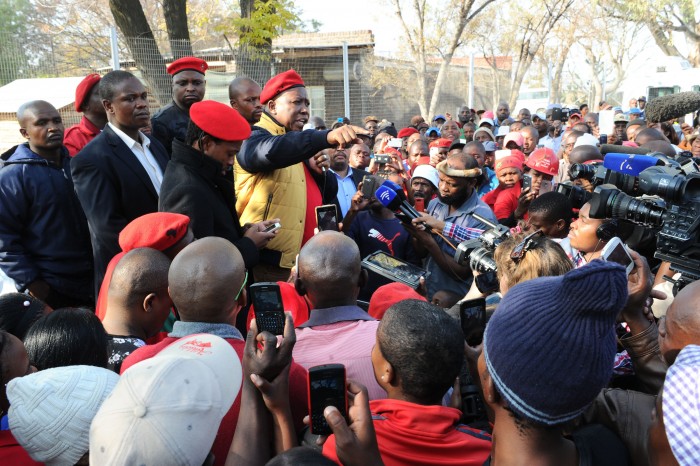 Today marks five years since the deaths of 34 miners who were shot during the Marikana massacre in 2012. The miners were shot on August 16, 2012, by police who were apparently trying to disperse the striking Lonmin mineworkers who were demanding a salary of R12 500 a month.

A week before the massacre, 10. people, including two police officers and two Lonmin security guards, were killed.

Government then established the Marikana Commission of Inquiry to investigate the killings, following which it recommended a full investigation that would serve to hold police officers who were involved in the killings accountable.

Five years down the line, no one has been held accountable.

However, the Marikana massacre gave birth to the Economic Freedom Fighters (EFF), perhaps also being one of the reasons the party MPs wear overalls to parliament – to show solidarity with the workers.

In a recent interview with Capricorn FM, EFF leader Julius Malema revealed it was the massacre that led to the formation of the EFF, a party that is surely a force to be reckoned with.

He said, following his expulsion from the ANC in 2012, allegedly for sowing division and bringing the party into disrepute, he had given up on a life in politics, though a part of him still hoped the ANC conference that same year would ensure his comeback in the ruling party.

“I was in the farm, I had given up, and [thought], Cassel Mathale and them are still in power, ANC is still in power, the comrades are there, so let’s wait until there is change of heart in the leadership, and then in the conference, maybe there will be changes there, and I will go back to the movement,” he said.

Before the ANC conference, the miners were shot, and the news was all over the TV and newspapers. Malema said he was on his farm the day the miners were killed. He kept seeing footage of the miners, but did not take it seriously, as he thought it was an old event.

“But this picture kept on inviting, and I was like, but this uniform looks recent. Then I paid attention, only to realise that these people shot the workers. Then I called Andile Lungisa, and he confirmed, then I called Floyd Shivambu, and we agreed that Andile must go there and check because Andile was still in the National Youth Development Agency and we were outside.”

It seems, however, the miners were not satisfied with Lungisa’s visit, as they kept calling the EFF leader to help them, an idea he did not support, as he was not part of any political organisation at the time.

Two days later, Malema went to Marikana when the situation was still volatile.

“The police were trying to block me, but I insisted. They said: ‘No, these guys are going to kill you,’ and I said: ‘No, they can’t kill me, these are my brothers, I have to listen to them.'”

When he arrived, instead of telling him about their issues, the miners told Malema he needed to form a political party.

“There is no way we’re going to be listened to if you’re not in the space,” they told Malema.

Following the massacre, another strike broke out in a different mine, and they too organised themselves and invited the EFF leader to go and address them. When he arrived, they also told him to start a political party.

“From time to time, I would engage with the workers and ordinary people who are involved in one protest or another, and they kept on saying to me: ‘We need you back in the picture. You must come and help us.’

“So when I was there, those guys kept calling me, and they planted that seed,” he said.

In a statement on Wednesday, the party said the Marikana massacre must always remind South Africans of the plight of black workers under ANC rule, vowing to bring solutions to the problem.

“A lasting solution to the working conditions of mineworkers is nationalisation of mines. Mining companies have not only exploited black workers over the centuries, they have also drained South Africa’s tax base through the immoral profit shifting and illicit financial flows mechanisms.

“The mines must be expropriated from the multinational corporations and be used as key drivers towards industrialisation in our country for the benefit of all,” it said.