Mayor says about 28 million tons of carbon dioxide are emitted annually within the city. 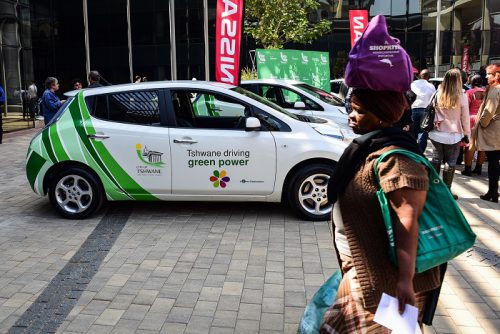 Celebrating the end of Women’s Month with a “green mile” convoy of electric vehicles touring some of the 32 charging stations around Pretoria, City of Tshwane chief of staff Marietha Aucamp said that as technology develops, the city has no other choice but to embrace electric vehicles.

She was proud that the city was doing exactly that with the 10 Nissan LEAF vehicles in the city’s corporate fleet and two solar-powered electric vehicle charging stations.

“We are in the process of entering into an agreement with the South African National Energy Development Institute to expand the electric vehicle charging infrastructure in the city,” Aucamp said.

There are presently close to 100 charging stations in the country and Aucamp applauded the Menlyn shopping mall for installing several charging stations, saying she hoped more malls and commercial office parks would follow suite.

Mayor Solly Msimanga said: “Approximately 28 million tons of carbon dioxide equivalent are emitted per year within the city and just less than a fifth stems from transport-related emissions.

“As such, the city is exploring every possible measure to reduce this footprint, including transitioning to cleaner mobility. Nissan is regarded as a key stakeholder of the city with a strong presence in Rosslyn, the city’s hub for the automobile industry and a priority economic sector.”

The director of uYilo eMobility Technology Innovation Programme at Nelson Mandela University, Hiten Parmar, said the best part is that after using electric cars for eight to 10 years, the batteries could be taken out and repurposed, for example, to rural schools as a source of sustainable energy through solar energy generation.

Parmar said batteries could be used to store energy and provide scope for computers to help educate children.