When the police arrived they found four men lying near the railway line between Marry Me and Block VV, with visible head injuries. 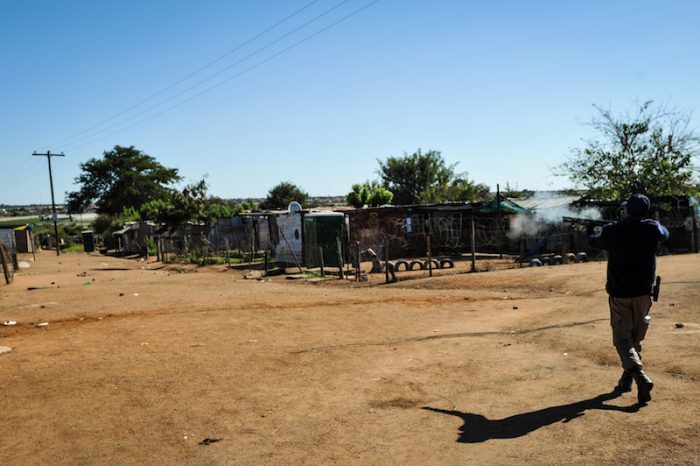 A police officer fires off rubber bullets at residents of Soshanguve Block KK during a service delivery protest, they demand to have proper electricity and housing and vowed to continue their protest untill their needs are met, 17 May 2017, Soshanguve, Pretoria. Picture: Jacques Nelles

Service delivery protests had already led to the deaths of two men in Soshanguve yesterday when violence erupted at Marry Me informal settlement following demands for RDP houses.

“Soshanguve police, together with the public order policing [unit], were summoned at about 8.30pm to calm a volatile situation by irate residents who closed down the Hebron Road with rocks and burning tyres, complaining [about a shortage of] RDP houses and electricity.”

She said the protests turned into public violence and shacks were set alight. When the police arrived they found four men lying near the railway line between Marry Me and Block VV, with visible head and face injuries. According to a witness, the men had been stoned by the mob.

“Among the four, one of them had already died as per paramedics’ examinations, while three were rushed to the hospital. One died [yesterday] morning, increasing the number of deaths to two,” Mtsweni said.

The motive for the injuries and deaths were unknown and no arrests have been made.

“Everything has [become peaceful] as we have deployed public order police to monitor the situation. There was no serious damage to municipal property except for some roads.”

The protests, however, have left thousands of commuters stranded after Metrorail suspended services at Mabopane, Kopanong and Soshanguve stations.

“We are waiting for the team on the ground to give us a report on whether it is safe or not to run the trains. If protesters barricade the railway line … it could lead to a derailment that could harm commuters,” said Games.