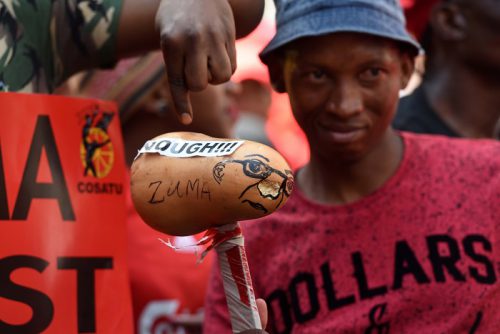 A march by COSATU in Johannesburg, 27 September 2017. They marched in Johannesburg as part of their national strike and handed over memorandums to the City of Joburg, FNB, the Gauteng Premier and the Chamber of Mines. Picture Neil McCartney

They came in an energetic red tide, driven by anger and frustration that the better life they have been endlessly promised is still a faraway dream.

There was singing, dancing and the waving of placards, and the marches throughout the country went off peacefully.

In Johannesburg, the protesters were overwhelmingly wearing the red colours of Cosatu and the SA Communist Party (SACP), although here and there were ANC T-shirts, whose wearers made it clear they did not like the way their organisation is heading.

Some came to show their support for Cyril Ramaphosa as the next president of the ANC, many came to demonstrate that “Zuma must go”, while others were preoccupied with more worker-related issues such as wages, labour brokers and job losses.

A recent teaching graduate, Nokuphiwa Bulani, told The Citizen she believed this strike was of utmost importance, especially for the youth.

“I recently graduated and have been unable to find a job because people are paying for positions and paying for jobs, which is very unfair,” she said.

She also stressed the importance of the participation of the youth, as this benefited them as the future of South Africa.

“I think they are doing themselves and the youth of the country an injustice by not coming to this march because they sit at home and hope for change,” she said.

Julia Tau, a mother and a strong believer in the dream of a country where corruption does not exist, said she was 100% behind this march against corruption, state capture and freedom.

“We demand that the freedom we fought for be given to us and retrenchments must be stopped. Joburg mayor Herman Mashaba must also step down, especially after taking away the 6 000 litres of water per household. How does he expect poor people to pay for water when they cannot buy bread?” she said.

Mandla Madlabane, a teacher who has been a member of Cosatu for 21 years, said he believed the march was essential in ensuring the country can move forward.

“My fellow members asked me to be part of this march and I came to support the fight against Zuma and the Guptas because I believe in this country and that one day we will live peacefully,” he said.

The national strike, called by the Cosatu central executive committee, followed a Section 77 Notice on State Capture and Corruption that was submitted to Nedlac on July 17.

The march was motivated by the former public protector’s report that the current administration has been captured and that a network that is in a continuous process of looting state resources and involved in corrupt activities is not being held accountable.

In an attempt to promote and defend the interests of workers, the working class and the poor, a memorandum was drawn up and prepared to be handed to Mashaba, who refused to meet the crowds outside City of Johannesburg offices out of fear of being attacked.

Delegates were then sent on behalf of Mashaba to meet the crowd and take the memorandum on his behalf.