The police minister admits police have 'lowered the guard' on the farm murder protests. 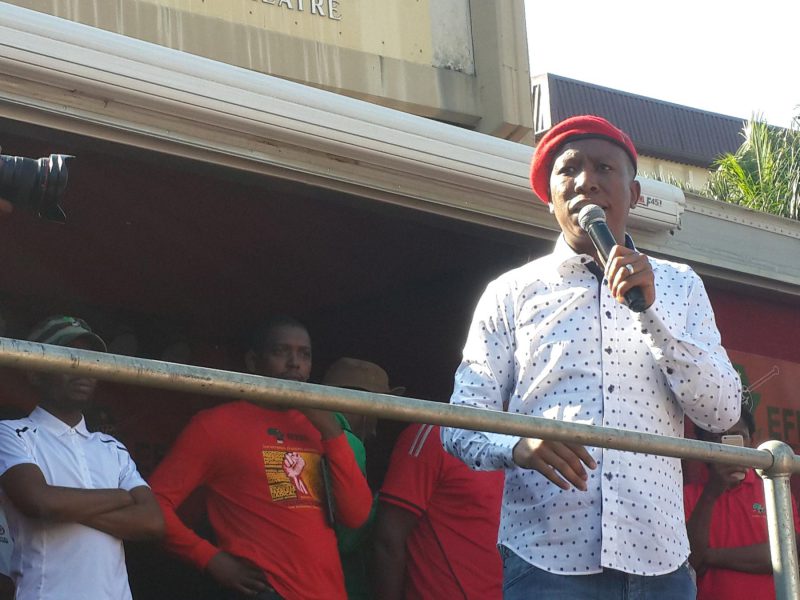 EFF leader Julius Malema has taken to social media to complain about the difference in treatment by police in the farm murder protests as compared to protests by black African youth.

In a tweet that has received a lot of comments and retweets, Malema said protesters were “illegally” blocking roads, but police were not shooting rubber bullets at them. However, if it were African youth blocking the roads, the treatment by police would have been different.

“White farmers are blocking the roads illegal and police are not shooting rubber Bullets but if it was African youth, yho!!! @MbalulaFikile.”

White farmers are blocking the roads illegal and police are not shooting rubber Bullets but if it was african youth, yho!!! @MbalulaFikile

Among those who commented was Police Minister Fikile Mbalula, who said Malema’s observation “might be right”, as police had “lowered the guard”.

“Lawlessness from any quarter is unacceptable and should be condemned. In this instance you might be right, Police lowered the guard,” he said.

The EFF leader went on to inquire about the whereabouts of the Umkhonto We Sizwe Military Veterans Associations (MKMVA) soldiers, saying he needed them. He, however, called them drunkards.

Where are those MKMVA drunkards when you need them on a #Blackmonday, yeses.

His comments divided social media, with some saying police had to treat all protesters the same way, while some said his observation was wrong, saying the protesters did not loot or burn any buildings.

“Oh, and they are not burning stuff…that surely helps…..great tip for future mass action,” said one who was in support of the protests, while another wrote: “When taxi and truck drivers were arrested last week for blocking the highway did you see anything burnt? Jy praat kak.”

The rest complained that the road blockage prevented most from reaching their destinations.

“Some matriculants couldn’t make it to their writing stations CIC because of this racist protest. This is totally unacceptable,” said one of his followers.

#BlackMonday – case of black and white?

DEFINE IRONY: They want us to support #BlackMonday against farm murders. Yet parade an Apartheid flag, responsible for the murders of blacks pic.twitter.com/3qQ0K3vFud

Please don't believe crazy people like this one represent all. These are extremists and have no place in S.A. #BlackMonday #StopFarmMurders pic.twitter.com/6IfcBxVJLu

#BlackMonday STOP THE MURDER, RAPE & CRIME all South Africans beg you @MbalulaFikile our request, demonstration & prayer is not lawlessness! pic.twitter.com/zfQ69qmQhJ

No you can do better folks. pic.twitter.com/ilwu8CePYl

That Old Apartheid Flag must be Banned #BlackMonday

So it's only #WanyaTsotsi when it's black people? Still hoping to hear that farmers have been arrested for blocking highway #BlackMonday

#BlackMonday these farmers think they are too special, they must bring back our land actually and voetsek from this country!!! pic.twitter.com/cGLRoYICZr

#BlackMonday Farmers have land because they paid for it with money honey!!! And that food you get at the shop… Guess where it came from!

To think, that I nearly wore a black shirt to work this morning #BlackMonday pic.twitter.com/hDJL8gPAsm

If we all came together without tribalism and all the crap that separates us, they'd be back in the ice ????#BlackMonday

If we all came together without tribalism and all the crap that separates us, they'd be back in the ice ????#BlackMonday

Is it a surprise that #BlackMonday racists are using a white cross which is also a symbol used by the KKK? Uhm.. NO!