Msimanga chased away by grieving families

According to residents, Msimanga had promised in September that he would have the lights repaired by this month. 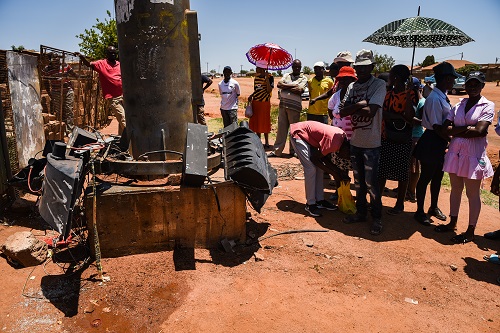 An angry community hurled stones at Tshwane mayor Solly Msimanga yesterday when he tried to visit the families of five children who were killed when a high mast light fell on their heads in Soshanguve at the weekend.

Msimanga, who arrived with the Tshwane metro police, was met by disgruntled residents, who blamed the tragic incident on the mayor after he apparently promised to repair the damaged light in Block X.

Cops resorted to firing rubber bullets to disperse the community, leaving Msimanga with no choice but to leave the scene without getting out of his car.

Seven children were playing near the high mast light on Saturday when the lights came down on their heads. Four of the children – Dimpho Bopape, five, Boitshoko Bopape, 11, Lethabo Matibako, nine and Maikano Khoza, nine – were killed on the scene.

Kearabile Baloyi, 11, died later in hospital, while Ofentse Khoza, 11, was to undergo surgery at George Mukhari Hospital yesterday. According to residents, Msimanga had promised in September that he would have the lights repaired by this month.

Speaking to the Bopape family, who live next to the fallen light, grandmother Susan Bopape told The Citizen they had reported the faulty light to the municipality for the past five years, but cable thieves continued to damage the same light.

“We have always complained about this light because it gets dark and people get robbed and houses are broken into. We really didn’t expect something so tragic to happen.

“Dimpho was so excited about graduating from Grade R. She would always say how excited she was to wear her graduation dress so she can start Grade 1 next year. We are really not taking this well,” said Susan.

Thabo Lebese, father of Lethabo, was sifting through the debris of the shattered lights where he found pieces of a skull.

He told The Citizen he was returning from work on Saturday when he received a call about the tragic incident.

“No one can help me. Lethabo’s mom only passed away last month. I have to go through this alone,” he said.

Tshwane ANC leader Mapiti Matsena, who visited the families with other ANC leaders and councillors, said the incident was a “clear indication” of poor service delivery in the townships.

He said they had warned Msimanga not to visit the families as the community was outraged by the DA-led government’s “lack of service delivery”.

“But the mayor insisted. There is a serious service delivery challenge, especially in townships. When our councillors report some of these issues to the MMCs (members of mayoral council), they do nothing.

“This is not a cable theft issue as reported, but an indication that there are problems of service delivery in townships and budget is not allocated,” Matsena said.

Msimanga, however, believed the ANC leaders chose to put their “own narrow political interest” before the feelings of the families.

“It is now undeniably clear that the ANC in Tshwane has given up all pretence of caring about the people and is now using people’s pain to drive a political agenda,” said acting mayoral spokesperson, Lindela Mashigo.