Kalleope was called in as the defence’s only witness in the mitigation of sentence. 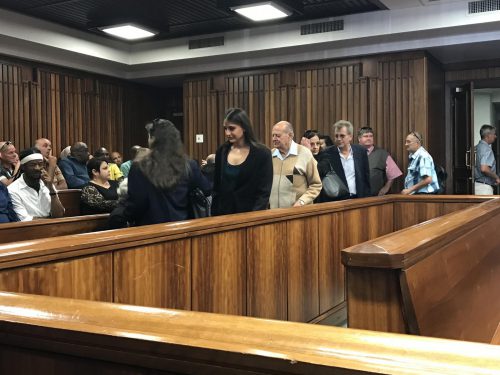 Christopher Panayiotou's sister Kalleope and other members of his family at the Port Elizabeth High Court for sentencing proceedings on Thursday.

The sister of convicted murderer Christopher Panayiotou, Kalleope, on Thursday pleaded with the Port Elizabeth High Court not to sentence her brother to life in jail for ordering the killing of his wife, in a letter in which she stressed the importance of family ties.

Panayiotou was convicted for the murder of his school teacher wife Jayde in April 2015. The schoolteacher was kidnapped outside her home in Kabega Park and shot execution style on the outskirts of Kwanobhule.

Kalleope was called as the defence’s only witness in mitigation of sentence. The letter alludes to notion the that blood is thicker than water, and stated that even though they mourned the loss of Jayde, the family support the businessman 100 percent.

She said that as a family they chose to support Panayiotou in his hour of need.

“We humbly ask for mercy in giving a lesser sentence than life.”

“To our brother and son, know that your family is supporting you. We love you and will stand by your side. Have faith. We do not [harbour]  any hate and hope that everyone eventually finds peace in some way.”

Kalleope told the court that the Panayiotou family loved Jayde dearly, She said her sister in law had been an integral part of the family and they felt a void following her death.

She said that the family missed Jayde and like the Inggs family, they suffered from her loss constantly.

“We have respectfully not reacted to the ongoing public onslaught, and often vile criticisms against our family. As if Jayde’s death and Christopher being found guilty it not enough for us to bear, social media continues to crucify us.”

Kalleope said her brother’s high school teachers described him as a “gentle giant”.

She said that her brother was a loving, caring and compassionate person and recalled an incident at a school hike when he helped a fellow student up a mountain because the student was feeling ill.

Kalleope also described her brother as a star businessman who quadrupled the turnover of his OK Grocer.

“Christopher has taken everything that has come his way and cooperated with the police as testified by police officers in this case. He has always had impeccable manners and been a polite gentleman.”

The State called for the minimum sentence of life imprisonment for Panayiotou and Sibethema Nenembe.

Panayiotou was earlier convicted of Jayde’s murder, while Nenembe was convicted of murder and robbery with aggravating circumstances.

The State asked that Zolani Sibeko, who was convicted of conspiracy to commit murder, be jailed for 18 years.

Meanwhile, Defence Advocate Terry Price asked for more lenient sentence than life. He asked the court to take into account that Panayiotou was a first offender and had a good chance of rehabilitation.

Zolani Sibeko’s attorney, Peter Daubermann, asked for a four- to five-year sentence, adding that his client withdrew from the conspiracy.
However, the State argued that Sibeko did much more, in that he scouted for Jayde and that the murder was eventually committed.

Judge Dayalin Chetty will hand down sentence on Friday.