Convicted racist Vicki Momberg said on Friday that she did not agree with the findings against her by the Equality Court earlier this year. 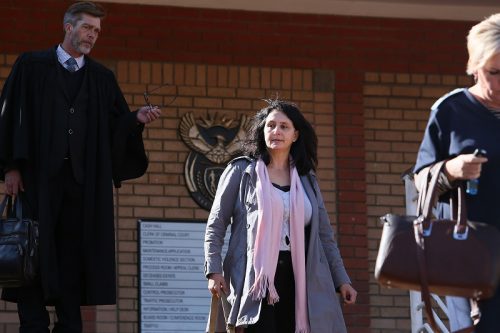 In February 2016, Momberg, 48, was seen on a video shouting racial slurs at police officers while they were assisting her after she was involved in a smash-and-grab incident in Johannesburg.

During proceedings at the Randburg Magistrates’ Court on Friday, Momberg denied accepting the ruling by the equality court that the words she used were hate speech and said they were not intentional.

“He [The magistrate] knows what he is doing and I know what happened that night and I did not go out intentionally that night.”

The Equality Court had ordered Momberg to attend a programme of integrated community service and sensitivity training that will be administered by the South African Human Rights Commission, along with affiliate organisations such as the Ahmed Kathrada Foundation.

The court also ordered Momberg to pay Constable Clement Mkhondo, whom she shouted the racial slurs at, R100 000 damages.

On Friday, Momberg said she felt Mkhondo took her to court for his own monetary reasons and not because he was offended by her utterances because he did not give the money to charity.

Momberg told the court that she was willing to undergo the prescribed treatment, but did not agree with the court’s findings that her actions were hate speech.

Earlier Momberg wept while on the stand and told the court that she wasn’t able to drive on her own at night and was irritable following the incident. She said that led to her getting medication.

“I always feel like I’m underperforming,” Momberg said while explaining how she felt after the incident.

“I had numerous people I contacted, and it was not possible because of the stigma attached to the matter. We found Dr Fine, and he did not want to come testify.”

Baba read from a transcript from the equality court that said she was able to be the best estate agent despite the trauma she had experienced.

“Yes, I was good at my job,” she responded during the equality court proceedings, which came after the smash-and-grab incident.

Baba put it to her that there was a contradiction between a statement from her psychiatrist on her emotional state following the incident and her testimony during the equality court case.

“It’s not acceptable to attack me on something you know nothing about, and it’s highly offensive,” Momberg said to Baba as he was cross-examining her.

Momberg explained the various fallouts she had with a number of legal representatives, which she said were all not performing the way she felt they had to.

“15 November, do your recall being in my office and informing me that you would report me to the chief magistrate?” Baba questioned her.

Momberg said she had felt she was being victimised by Baba.

“I don’t know how to console people I don’t have a relationship with. People won’t know me for who I am, the media and the court have put things out of perspective.

“I don’t know the words to remedy what I’ve done.”

The matter postponed to December 7.

Travel ban: Holidays abroad up in the air due to Omicron
6 hours ago
6 hours ago
PREMIUM!

'Nothing new' about vaccine mandates, say experts
7 hours ago
7 hours ago

Travel ban: Holidays abroad up in the air due to Omicron
6 hours ago
6 hours ago
PREMIUM!

'Nothing new' about vaccine mandates, say experts
7 hours ago
7 hours ago