Employees say they’re paying for the financial abyss caused by management and government. 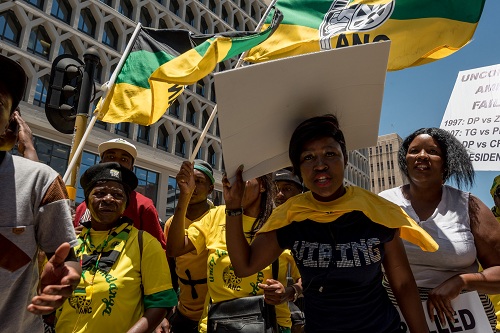 Supporters of Nkosazana Dlamini-Zuma protest outside the Johannesburg High Court on 12 December 2017. The protests occured as Matthews Phoza applies to stop unity branches from going ahead to the ANC elective conference. Picture: Yeshiel Panchia

SABC employees from Pretoria to Polokwane and the head office in Johannesburg have downed tools in a bid to obtain a 10% wage hike, putting broadcasting of the ANC’s 54th national elective conference this weekend at risk.

The organisers predict a fullblown strike today, with picketing. Employees are demanding the communications department take responsibility for the SABC’s dire financial state instead of “punishing” staff by not giving them their overdue annual increase.

SABC reporters, camera operators and technical staff said the national broadcaster had only offered a 4.5% increase, eight months after their new wages were due to be paid.

Members of the Communications Workers Union (CWU) and the Broadcast, Electronic, Media and Allied Workers Union took to the streets in protest marches and Kingsway Road in Auckland Park in Johannesburg was closed off.

Radio station Ikwekwezi FM did not air news bulletins or current affairs shows as the majority of their staff were on strike. CWU spokesperson Tshepo Matlou said the threat to the ANC conference was the fault of the SABC, not the workers.

“To not broadcast the ANC conference is not our decision,” he said. “We don’t want that to happen. But it just so happens that the workers are outside protesting and that’s the SABC’s fault. The nation therefore will not be able to watch the conference.”

Protesters yesterday handed over a memorandum of demands to SABC bosses.

“We are not bowing down. We are still open for negotiations. The SABC needs us so the conference can be aired,” Matlou said.

TV reporter Sipho Stuurman told The Citizen workers felt they were being punished for the bad decisions taken by management.

“We didn’t hire those people who came with 90% policies that decreased our viewership and profits as an organisation,” he said.

“But when they [government] have press conferences, they want us there. The communications department needs to take responsibility for placing people in the organisation that have sunk our finances. We can’t pay that price.”

Reporter Ofentse Setimo said he believed the SABC was negotiating in bad faith.

“They should have put the offer on the table before the threat to the ANC elective conference because our livelihoods are on the line,” he said. Neo Makhwiting, SABC Hatfield CWU’s chairperson and a radio reporter, added: “We will make sure the proper and smooth broadcasting of radio and television is affected until they meet our demands.”

SABC spokesperson Kaizer Kganyago had not responded to calls for comment at the time of going to print.

Zuma dismisses ‘rumours and gossip’ about SABC board appointment