City of Joburg may declare affected areas a disaster zone after extent of damage is assessed. 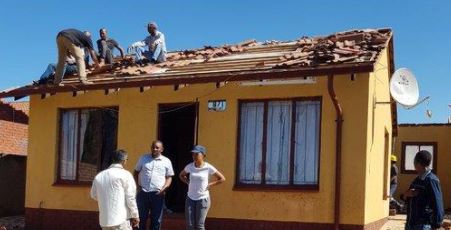 Joburg mayor Herman Mashaba has set a deadline of two months for an investigation into the quality of buildings after the collapse of more than 40 buildings in Protea Glen, Braamfischerville and other areas in Soweto in a weekend storm.

The city’s Group Risk Advisory Services will conduct the investigation and identify the contractors involved in the construction of the buildings. The city’s role in issuing certificates of occupation affirming the safety of these buildings and the role of financial institutions funding construction of these flawed buildings will form a central part of the probe.

Mashaba convened a multi-stakeholder meeting yesterday to deliberate on developments relating to the damage caused by the hailstorm over the weekend. The meeting was attended by the city officials, civil society organisations, city entities, the SA Social Security Agency (Sassa) and officials from Gauteng provincial departments.

“This comes after an engagement meeting held on Sunday, where joint operations committee stakeholders from the city and provincial government agreed on a number of interventions to provide relief assistance to residents affected by damage caused by the hailstorm.

“Part of the discussions on interventions included a comprehensive damage and losses analysis, response and relief efforts and a preliminary report expected to be released tomorrow [Friday].

“The report will table the full extent of the damage caused by the hailstorm and whether the event needs to be declared a provincial or local disaster,” Mashaba said.

Based on the damage and losses report and additional affected areas identified, notwithstanding the capacity of the city to respond, the meeting took a decision to explore the possibility of declaring a disaster area, pending the quantification of the damage, Mashaba added.

Some parts of Braamfischerville, which are administered by Eskom, are still without power and the mayor has instructed of ficials from City Power to ensure that Eskom restores power to the residents. The Johannesburg Roads Agency has started restoring traffic lights throughout the affected areas.

“The Gauteng provincial government provided temporary accommodation and emergency tents and mattresses have been provided for those displaced. The city has made available community centres in Regions C, D and G for temporary relief to those in need of emergency shelter.

“Further, Sassa and the provincial department of social development have provided food parcels through the assistance of civil society organisations,” the mayor said.

Mashaba also appealed to all members of the public to please assist by donating to civil society organisations such as The Gift of the Givers, The Red Cross Society, Zakm International Rescue, Alimdaad Foundation, Rhema Church and Pzuchi Foundation.