Many accidents were caused by human error in the manual signalling process. 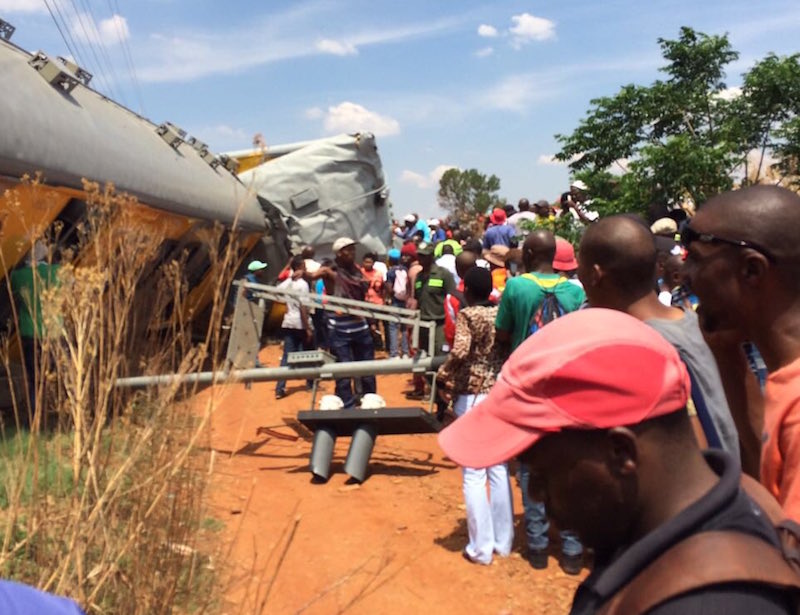 Paramedics have confirmed one person has died in the crash. Picture: @brentsw3 on Twitter.

While the Passenger Rail Agency of South Africa (Prasa) has tried to blame vandals for a spate of commuter train accidents, the organisation has flouted safety orders from the country’s rail safety regulator, putting hundreds of thousands of passengers at risk.

There have been a number of accidents over the past year involving Prasa commuter trains which have been caused by human error in the manual signalling process.

Prasa has ignored two prohibition directives in that time from the Railway Safety Regulator which ban manual signalling because of the dangers it poses.

But it was the signalling errors which followed the vandalism which actually caused the collision. Fred Nel, the DA’s Gauteng Shadow MEC for Roads and Transport, said Prasa’s safety issues ran far deeper.

The latest train crash happened a week after a fatal train accident involving a truck left at least 18 people dead near Kroonstadt. Nel suggested that Prasa’s railway system was operating on dangerously outdated technology and was not making adequate use of its policing system.

Yesterday, the Railway Safety Regulator (RSR) issued the Prasa with a another prohibition directive, barring it from allowing trains to be directed manually on different routes, after it found it was this method which led to the crash in Germiston on Tuesday.

Normally trains would be directed via automatic signals controlling traffic, but RSR spokesperson Madelein Williams said Prasa has increasingly been using a manual system in which a control officer directly contacts a train driver to authorise passage if automatic signals are damaged as a result of cable theft.

Nel said: “Gautrain was able to successfully secure its cables within its system using technology and it’s a good strategy. “Granted, Prasa has a much larger railway network and it would be much more difficult to secure it, but they do have railway police and it is their job to ensure they prevent this.

They can also use technology to prevent it.

“I suspect there are problems with the automated system that they are not telling us. “The information that we have received is that those operating the manual system are not always at their posts for various reasons.”

It also emerged that Prasa had contravened a previous prohibition directive issued last year, ordering that no manual signalling was to be used in Gauteng.

This was one of the reasons why the RSR issued its latest directive nationally, saying it was increasingly concerned with the use of manual signalling.

Nel said the signalling was outdated, saying in other countries, as well as in the case of local operator Gautrain, the signalling system communicated automatically and directly with the trains, eliminating the space for human error.

“On the Gautrain, if the driver falls asleep or has a heart attack, the system stops the train itself. “Our rolling stock can’t do this. Prasa has also been slow in updating the signalling system of our rolling stock and they need to do so to ensure a safe railway system.”

Prasa spokesperson Lillian Mofokeng diverted questions to Prasa Railway Acting CEO Mthura Swartz, who was not avaible on the phone at the time of going to print.