No mercy for traffic violators this Easter

Tshwane Metro police chief, Lieutenant-General Johanna Nkomo, warned motorists that 'any offence would be made a big deal' this weekend. 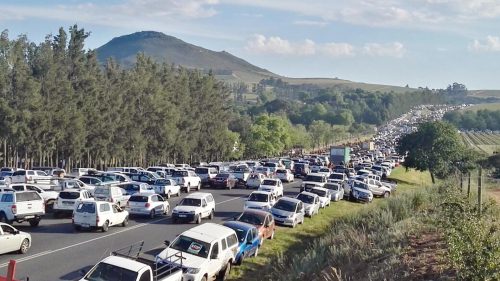 Police across the country will be out in full force to ensure travellers remain safe this Easter weekend, and that violators of road rules end up behind bars.

Johannesburg and Pretoria Metro police have warned that they will have zero tolerance for transgressors.

Following seven deaths on the city’s roads last Sunday, Johannesburg Metro Police Department (JMPD) Chief Superintendent Wayne Minaar said the chief of police, David Tembe, has instructed all officers in the JMPD to be on duty this weekend.

“There will be JMPD officers every five kilometres, on all freeways to ensure road safety. JMPD will have no mercy on drivers who break the law. There will be roadblocks on all main roads and freeways. Drivers will be checked for valid licences and those with illegal licences will be fined,” said Minaar.

Police in Pretoria will adopt a similar, no-nonsense approach.

Speaking at the launch of the Easter road safety campaign in Waltloo yesterday, new Tshwane Metro police chief, Lieutenant-General Johanna Nkomo, warned motorists that “any offence would be made a big deal” this weekend.

“There is nothing too big or too small that we won’t take into account. If your indicator is not working, it will be made a big deal. If a pedestrian is crossing a highway, that will be a big deal. It takes one little mistake to bring havoc and create offences, danger, and create widows and widowers,” she told the metro police officers.

Nkomo sent a stern warning to those who plan to party this weekend.

“I don’t know how many drinking places we have in Tshwane alone. Instructions given to our members is that any drinking place will be closed as it is supposed to. We are also saying, as you enjoy yourselves, get yourself a designated driver, an Uber, or meter taxi because the moment you leave a pub, you get into your car and put the key in the ignition and start the car, we will be on you. Not because we hate you, or want to make your weekend miserable, it is because we care,” she said.

The N3 Toll Concession (N3TC) have also warned of increased policing along the route, for those who will be heading to the coast for the long weekend.

The N3TC manages the N3 Toll Route between Cedara in KwaZulu-Natal and Heidelberg in Gauteng.

Daily news update: Spotlight on Tembisa 10, Niehaus vs ANC and load shedding to move to stage 3
8 hours ago
8 hours ago
PREMIUM!

Stage 4 load shedding cripples businesses - and costs about R2.8bn
8 hours ago
8 hours ago

Daily news update: Spotlight on Tembisa 10, Niehaus vs ANC and load shedding to move to stage 3
8 hours ago
8 hours ago
PREMIUM!

Stage 4 load shedding cripples businesses - and costs about R2.8bn
8 hours ago
8 hours ago