Tony Leon ‘did the right thing’ on Winnie murder probe

Any reminder of facts, rather than untrue speculation during the current canonisation of Madikizela-Mandela, is probably unwelcome, says Donald Gibson. 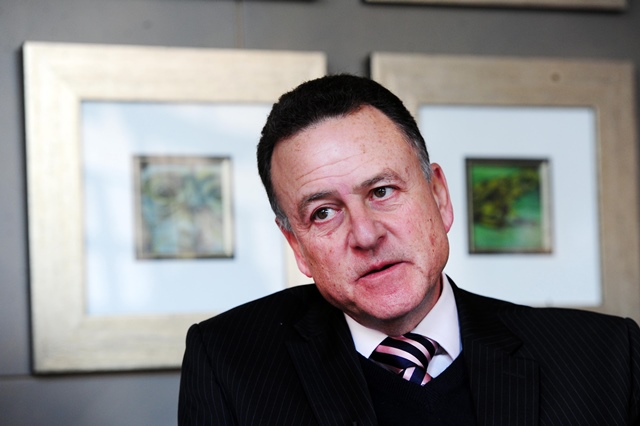 Former DA leader Tony Leon during an interview on May 21, 2014 in Johannesburg. Picture: Gallo Images

Former DA leader Tony Leon did nothing wrong in asking for the murder case against Winnie Madikizela-Mandela to be reopened – and any suggestions to the contrary are an attempt to sanitise history, according to his spokesperson.

A political analyst also believes the ANC should avoid attempts at romanticising its own involvement in events leading up to democracy.

Former DA chief whip Douglas Gibson, who was speaking on Leon’s behalf, was responding to former safety and security minister Sydney Mufamadi’s remarks during a press conference, in which he distanced himself from the suggestion in a recent documentary that it was he and the ANC who wanted the investigation into Stompie Seipei’s murder reopened.

“Any suggestion of an involvement with Stratcom before 1994, when Leon was opposition justice spokesperson, or afterwards, when he was the leader of the opposition, is a ridiculous lie. Leon was doing his job and any allegation that he was ‘behind’ the persecution of Winnie Madikizela-Mandela is also a lie,” said Gibson.

Yesterday, Mufamadi castigated the filmmaker of the documentary Winnie, Pascale Lamche, questioning her ethics in her representation of himself and the ANC.

The documentary suggests that the ANC asked for the police to reopen the investigation on Madikizela-Mandela for the murder of Seipei.

In 1995, Mufamadi set up a team of investigators to find evidence linking Madikizela-Mandela to the murder – even promising the team unlimited access to budgetary resources that would enable them to travel the world.

“Clearly, the public memory is rather short and any reminder of some facts, rather than untrue speculation and innuendo during the current canonisation of Madikizela-Mandela, is probably unwelcome,” said Gibson.

He referred “those interested in the truth” to Leon’s 2007 book, On the Contrary.

“It tells the whole story of our efforts to ensure that the under-investigation of crimes and the under-prosecution that took place during the last years of the apartheid government were put right under the democratic government, with thorough investigations and proper prosecution if sufficient evidence was uncovered. I was present at most of the interviews recounted and can personally vouch for the truth of what Leon wrote.”

Gibson said Leon’s involvement in the investigation was not clandestine and at the time highly publicised.

“After all, Madikizela-Mandela was convicted of kidnapping and sentenced to four years in jail.”

The judge described her in that trial, said Gibson, as “an unblushing and unprincipled liar”.

“There was a strong suspicion at the time about [activist] Lolo Sono’s death. There were public allegations made about Dr Abu Baker Asvat’s murder and the death of Seipei.”

Political analyst Ralph Mathegka said the conversations arising from the documentary have highlighted the need for a proper inquiry and that the ANC should not encourage a romanticised version of history.

“We should gain a perspective from this issue. A revolution is never as clean as people want it to be; a revolution is bound to have these kinds of hiccups and contestations when it comes to outlining the history.

“We are now having two versions of history contesting each other and people are only going to tell their version of history on the basis of where they find themselves in it. You can’t expect them to do any different,” Mathegka said.

Rising tide of leaks threatens to inundate Facebook
3 days ago
3 days ago
PREMIUM!

ANC and DA likely to shed some votes to Mashaba - analyst
1 week ago
1 week ago
PREMIUM!

Rising tide of leaks threatens to inundate Facebook
3 days ago
3 days ago
PREMIUM!

ANC and DA likely to shed some votes to Mashaba - analyst
1 week ago
1 week ago
PREMIUM!