Call for inquiry into Aids body 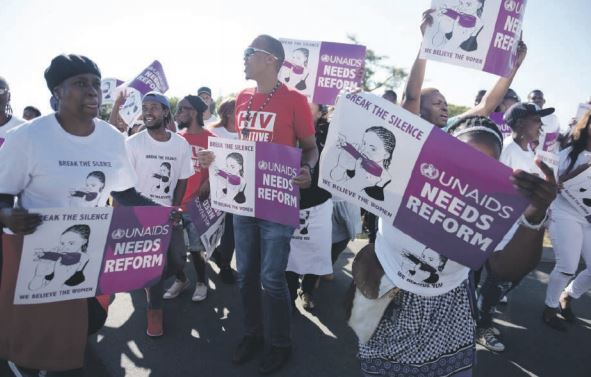 Regional HIV/Aids activists are demanding an in-depth independent investigation into the alleged culture of silence – and victimisation – within the Joint United Nations Programme on HIV/Aids (UNAIDS) organisation.

Regional policy and advocacy manager at the Aids Healthcare Foundation, Larissa Klazinga, highlighted the need for UNAIDS to conduct an independent investigation with binding recommendations on how to end the culture of silence among victims of sexual harassment, Aids, and gender-based violence.

Activists demanded an inquiry into Sidibé’s leadership, after his alleged poor handling of an investigation into allegations against his deputy executive director, Luiz Loures, for sexually harassing women within the organisation.

Activists picketed at the Pan African Parliament in Midrand, north of Johannesburg, last week and handed Sidibé a memorandum. Sidibe promised to engage with them to address steps to deal with his accusations and end the culture of silence.

During engagements with Sidibé, Klazinga said “he avoided most of the questions he was asked about his resignation and apologised for not being supportive of the victims, for not being sensitive enough, and said he recognised the culture of silence”.

Klazinga also said the toxic culture of silence couldn’t be addressed until Sidibé stepped down.

“No one is criticising his leadership on the HIV response, but we cannot justify his actions and defend them because of the amazing work that he has done in the past. [UNAIDS has] ignored the one within your organisation, so how can you stand up for Aids victims?” she said.

Klazinga noted the increasing statistics of gender-based violence and sexual harassment cases, saying UNAIDS needed to be accountable for their actions.

“We believe the victims and we believe that there needs to be justice and accountability with such issues,” she said.

Klazinga said activists also suggested the organisation should be led by an African woman.

“As HIV disproportionately affects women in sub-Saharan Africa, it makes sense that an African woman should lead the fight to end HIV,” said Klazinga.

Sidibé needed to address the personal attacks on several activists who supported those victims who alleged Loures sexually harassed them.

“We cannot personalise these issues by attacking activists. This is about the call for UNAIDS to end the culture of silence,” she said. “This culture of pitting activists against each other needs to stop. Working together, we can define a vibrant movement that addresses the issues of HIV, sexual harassment and gender inequality.”

16 days of activism: It’s now sisters in arms in a fight against GBV
21 hours ago
21 hours ago

Support for GBV and abuse victims needs to be normalised, says expert
23 hours ago
23 hours ago

16 days of activism: It’s now sisters in arms in a fight against GBV
21 hours ago
21 hours ago

Support for GBV and abuse victims needs to be normalised, says expert
23 hours ago
23 hours ago