Residents say they're tired of only seeing the mayor at election time, but Msimanga blamed those who were 'politicising' service delivery. 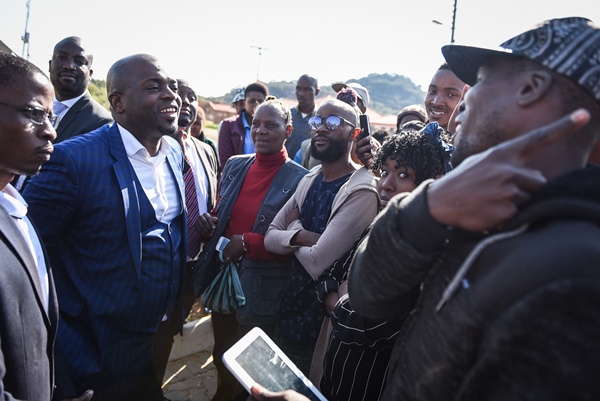 Tshwane Mayor Solly Msimanga is seen speaking to angered community members outside the Ga-Rankuwa Arts and Crafts centre where he and DA leader Mmusi Maimane visited to engage with the young people who have been given an opportunity through the FabLab Programme, 12 June 2018, Ga-Rankuwa, Pretoria. Picture: Jacques Nelles

A rowdy group of Ga-Rankuwa residents, some clad in ANC shirts, told Tshwane mayor Solly Msimanga to “voetsek” out of Zone 6 yesterday claiming he was only in the area to campaign for the party.

Msimanga had joined DA leader Mmusi Maimane and DA Gauteng leader John Moodey when they went to visit the Ga-Rankuwa arts and crafts centre, a small business and job creation project run by the City of Tshwane, to engage the youth about entrepreneurship.

But while waiting for Maimane, Msimanga was harassed by a group of angry residents, who yelled out “voetsek” as he tried to respond to their issues, attempting to chase the mayor away.

Zone 14 resident Mduduzi Mokwae said they were “fed up” by Msimanga’s “lies” as he was only in the area to campaign ahead of the 2019 national general elections.

“If we have problems with the sewer, we use our own buckets to throw away the sewage in the bushes. We have been promised decent service delivery since 2013 but today, we are surprised when he comes here for a few people that are students of this [arts and crafts] programme.

“We are used to his lies. He is promising again to engage with us at the end of June but we know he wants to make sure he wins next year’s election. I know he won’t bring change. They won’t come to the table to speak to us,” Mokwae told The Citizen.

Parts of the main roads in Ga-Rankuwa Zone 2 were left barricaded with rocks, bricks and burned tyres, with no protester in sight.

It was not clear if the blockade was ahead of the DA’s visit, but Msimanga and the DA leadership continued with their business while the angry crowd tried to gain access to the centre to confront the mayor.

But Msimanga blamed those who were “politicising” service delivery.

He said the community was angered by Eskom’s tariff hike and poor infrastructure maintenance, but instead turned their rage towards the city.

He continued: “How am I supposed to hear and address the community’s concern when you have people that are willing to ensure we don’t come to address the community’s issues? We need to move beyond the issue of politicising service delivery. I am committed to providing services to the people of Tshwane, but there are those hell-bent on making sure we don’t get to hear communities and respond to them.

After the visit, Msimanga bypassed the angry mob and was escorted out of the centre by police and his bodyguards.

ALSO READ: ‘I will resign if I flouted any rules,’ promises Msimanga