The submissions of Moyane's advocate, Dali Mpofu, are 'an attempt at constructing a conspiracy' which is easy 'the fewer facts you have'. 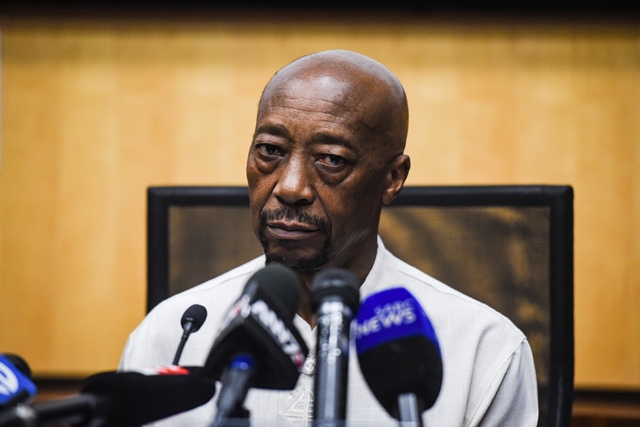 Tom Moyane, is seen during a press briefing held at the Sars offices where he disclosed to the media that SARS official, Jonas Makwakwa, had resigned with immediate effect, 14 March 2018, Pretoria. Picture: Jacques Nelles

Suspended tax boss Tom Moyane’s attempt to have the Nugent Commission of Inquiry into the South African Revenue Service (Sars) postponed until his disciplinary process is complete is a desperate grasping at straws, according to an expert, while the head of the commission accuses him of trying to paint himself as the victim of a conspiracy, despite the facts.

On Monday, commission head Judge Robert Nugent will decide on whether to halt his proceedings after Moyane’s lawyer, advocate Dali Mpofu, argued, among other things, that for his client to face both a disciplinary procedure as well as be the primary subject of an inquiry into Sars amounted to a case of “double jeopardy”.

Mpofu accused the commission of gross unfairness, saying previous witnesses had lied, with the biggest of these lies being the denial of the existence of the so-called Sars rogue unit.

Nugent, however, replied that Mpofu’s submissions were an attempt at “constructing a conspiracy”.

“I suggest to you that when you’re suggesting that there is some conspiracy to the witnesses that were called, you might not have been aware of the facts that I’ve outlined, which might have influenced what you have said, and you might not have said the same thing.”

Political analyst Andre Duvenhage was also less than convinced by Mpofu’s argument, saying the two concurrent processes they were objecting to need not clash to the point that either would have to be halted.

“Maybe some elements of conflict of interest between the two processes exists, but not to the extent that one would end up disqualifying the other. I think you can look at the same situation through two different processes and from two different perspectives, with two different objectives.”

Nugent himself had some fiery rebuttals for Mpofu’s tirade against the inquiry yesterday, remarking that he had never before been referred to as a “kangaroo court” and stopped short of accusing Mpofu of violating the Commissions Act.

Mpofu’s main arguments were around the supposed unfairness of the inquiry, particularly with how witnesses such as Public Enterprises Minister Pravin Gordhan was allowed to make grave accusations against Moyane, without the suspended commissioner being given a chance to defend himself.

He accused President Cyril Ramaphosa of abusing his power, by appointing his personal representative in a civil dispute to the Sars commission.

To this, Nugent remarked: “I am the commission” and said Professor Michael Katz was merely assisting him.

Duvenhage admitted there was an element of a conflict of interest with the Katz argument, but said it was another example of Moyane grasping at straws, as the relationship between Ramaphosa and Katz was a professional one.

Meanwhile, it emerged yesterday that former Sars chief of business and individual tax Jonas Makwakwa wrote a letter to Nugent asking that he also be allowed to present his side of the story, stating that he was available on Monday.

He castigated the proceedings this week, saying that for the past three days he had been watching “lies being told to the innocent citizens of this country”, referring to the testimonies of former Sars employees, including Gordhan.

“I want to be given an opportunity for the right of reply and to tell the real truth, not the rehearsed orchestra that the country is subjected to now,” he said in the letter.