His lawyer has, however, asked the court to consider his client was trying to 'shock and shame' Penny Sparrow and her supporters. 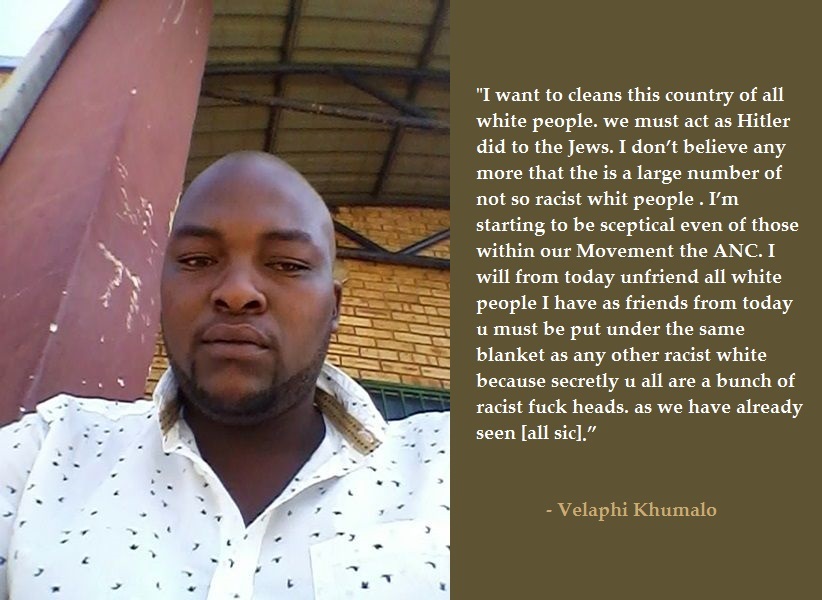 Gauteng department of sport and recreation employee Velaphi Khumalo appeared this week before the Equality Court sitting in the High Court in Johannesburg to answer to charges of hate speech brought by the SA Human Rights Commission (SAHRC).

It was reported earlier this week that he denied his utterances constituted hate speech after he, among other things, called for the “cleansing” of white people from South Africa on Facebook in 2016. He has, however, now admitted that what he said was wrong.

The SAHRC has called for a R150 000 fine against Khumalo, wholly suspended for a year, for his posts. They also want him to apologise unconditionally.

It was reported in 2016 he was reinstated in his provincial government job after having been suspended on full pay, which further incensed those he had offended.

In the wake of Penny Sparrow comparing black people to monkeys earlier in 2016, Khumalo had taken to Facebook that January to write: “We must act as Hitler did to the Jews. I don’t believe any more that the is a large number of not so racist whit people. I’m starting to be sceptical even of those within our Movement the ANC. I will from today unfriend all white people I have as friends from today u must be put under the same blanket as any other racist white because secretly u all are a bunch of racist f**k heads. as we have already seen [all sic],” he wrote.

The department of sport lambasted and distanced itself from Khumalo’s post at the time, which it described as “barbaric and racist”.

However, it later emerged that he was back in his post at work after being given a warning during internal disciplinary procedures.

SAHRC spokesperson Gail Smith said the commission had compiled all the complaints against him.

They also reported that they had received confirmation from then Gauteng sport, arts, culture and recreation spokesperson Nomazwe Ntlokwana that Velaphi had resumed work as a sports marketing official. He was apparently given a final warning before processes against him were concluded.

A case was opened against him after 19 complaints were ultimately lodged with the SAHRC.

On Friday, however, the Sandton Chronicle reports that the defence in his case has fully accepted that what he said was wrong.

It’s now known that he reached a settlement with the ANC and agreed to pay a R30 000 fine, and also issued an apology to the party.

Counsel for the SAHRC Advocate Mark Oppenheimer told the court Khumalo’s comments constituted a grave form of hate speech and amounted to genocide on the grounds of race. Oppenheimer told Judge Roland Sutherland that the previous apology Khumalo issued was to the ANC and the provincial government.

Counsel for Khumalo Advocate Stuart Wilson told the court his client had fully accepted his remarks were hurtful and said he had made numerous apologies. He said Khumalo had already been subjected to an internal disciplinary hearing by his employer.

Wilson told the court to remember the context in which the comments were made. He said Khumalo had been responding to Sparrow’s racist comments on Facebook. Wilson argued that, with his comments, Khumalo wanted to shock and shame the likes of Sparrow and her friends.