Limpopo gets R400m cash injection to bring water to Mopani

Amid allegations that hundreds of millions may have been stolen in a borehole scam, critics say the latest intervention is ANC electioneering. 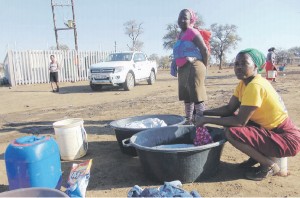 A R400 million cash injection into drought relief projects in the Mopani region is set to turn off the chronic water crisis that has plagued the region for the past nine years.

On Friday, executive mayor of Mopani district municipality Nkakareng Rakgoale handed over water projects worth R100 million to the residents of Bolobedu South, N’wamitwa and Sekgosese in the Greater Tzaneen and Letaba municipal areas.

“This is just in the interim. We hope that after the completion of the Nwamitwa Dam and the Giyani Water Emergency Intervention, all the 1.1 million people of Mopani will have water on their doorsteps,” he said at the handover in Thapene village on Friday.

However, some have branded it a gimmick to woo voters for the ANC in the elections next year.

Rakgoale’s announcement comes shortly after this newspaper highlighted the alleged embezzlement of about R100 million by water project managers in the region since 2009.

The project was spearheaded by Lepelle Northern Water.

Investigations by The Citizen since revealed that most contractors abandoned the projects soon after getting their first or second payment.

It was also found that most, if not all, of the boreholes drilled had not produced any water.

Premier Stan Mathabatha then committed R10 million to drill boreholes in the area in an emergency intervention.

But The Citizen found that these boreholes also did not deliver any water, although the service providers were paid. Provincial government spokesperson Phuti Seloba said that according to his records, all was in order when payments were made.