The president's billionaire brother-in-law seems well placed to benefit from his proximity to power, in both senses of the word. President Cyril Ramaphosa’s recent visit to Saudi Arabia and the United Arab Emirates has drawn both praise and criticism following the announcement of a more than R130 billion investment into the energy sector in South Africa from Saudi Arabia, the world’s wealthiest oil-producing country.

Among the questions now being asked are why Ramaphosa’s brother-in-law, Patrice Motsepe, and Motsepe’s business delegation were spotted in photographs as part of the president’s entourage.

The photo above generated some heated debate in ANC circles and beyond on Friday, particularly around the potential conflict of interest.

Motsepe is already one of Africa’s richest men, with a net worth calculated by Forbes as close to $2 billion (R25 billion).

It’s not clear why he was accompanying Ramaphosa to the Middle East. He was also known for accompanying former South African presidents on business trips.

Brian Dames was by Motsepe’s side. Dames is a former Eskom CEO and now the CEO of Motsepe’s energy company African Rainbow Energy & Power.

The Ramaphosa-Radebe axis of power

Ramaphosa was not the only high-powered family member in government for Motsepe on the trip, as the minister of energy, Jeff Radebe, is both Motsepe and Ramaphosa’s brother-in-law too.

The minister is married to Motsepe’s sister Bridgette Radebe.

Ramaphosa shifted Radebe to the energy portfolio in February as one of his first executive decisions after taking over from Jacob Zuma.

During the latter months of his presidency, Zuma was criticised by the anti-nuclear lobby for having reshuffled loyalist David Mahlobo from state security to energy in October 2017. Critics perceived the move as an effort to finalise a controversial R1 trillion nuclear deal with South Africa’s Brics partner Russia.

Ramaphosa’s administration has, however, made it clear the nuclear build programme has been placed on hold indefinitely.

It was reported in May that Deputy President David Mabuza was sent to Russia to break the “bad news” to Russia’s President Vladimir Putin that South Africa would not be going ahead with the nuclear deal involving Rosatom, due to affordability concerns.

Ramaphosa has, by contrast, backed renewable energy strongly – particularly under the IPP programme, which Motsepe now has a stake in.

Radebe was quick to sign renewable energy contracts in April worth about R55 billion with IPPs in what was seen as the first major investment deal under Ramaphosa. The deals had formerly suffered a two-year delay under Zuma. They were for power purchase agreements for 27 mostly solar and wind projects.

Motsepe’s energy company appears to be well placed to benefit from the trip to the Middle East. Although known mainly for its oil and gas industries, Saudi Arabia has a well-funded energy company focused on solar and wind power generation, ACWA, which has a presence in at least 10 countries.

Speaking on the success of the trip, Radebe was quoted as saying that “already we have signed a big deal on the renewable side of R12 billion with Redstone and ACWA in partnership with the Central Energy Fund for renewable in terms of solar and wind”. 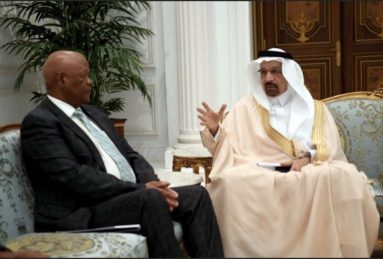 Minister of Energy Jeff Radebe on the trip to the Middle East. Picture: Twitter/GCIS

The inclusion of Motsepe and his delegation on the trip fuelled criticism among Ramaphosa’s detractors in both the ANC and outside it. They view these business links with suspicion.

The inclusion of Motsepe is also seen to be a possible conflict of interest since Motsepe is not the only big player in the renewable energy sector, and may be unfairly favoured through his sudden renewed proximity to power (in both senses of the word).

Ramaphosa told journalists earlier this month that he intends to market South Africa in much the same way he once wooed investment for his big companies when he was focused on business. He said he would build an “investment book” for the country to market to foreign investors.

Ramaphosa’s companies, which have been run in a blind trust since the president involved himself in politics again from 2014 on, were valued at about the equivalent of R6 billion in 2015.