The organisation Pappi plans to mass-mobilise crowds nationwide to block major highways to force government to drop the fuel price. 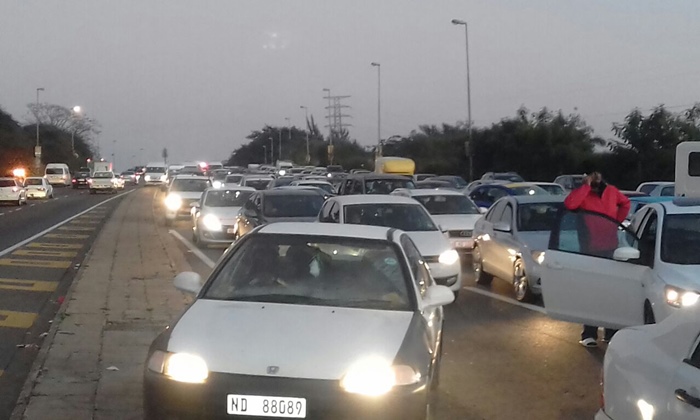 Pictures shared on social media on 18 July 2018, of the traffic backed up on the N3 in KwaZulu-Natal as part of a protest over fuel prices.

Police have warned against violence and intimidation in a planned protest over fuel prices, supposedly taking place next Friday, after several roads in and around Durban as well as the N2 south were blocked yesterday by people demanding petrol prices be decreased.

An organisation called People Against Petrol and Paraffin Price Increases (Pappi) has vowed to mobilise people in various provinces to block roads and major highways in a bid to leave government no choice but to drop the fuel price. It currently costs over R16/l for 95 unleaded petrol and is set to increase again in August.

The organisation was behind a protest in KwaZulu-Natal yesterday when motorists blocked the N3 in Pietermaritzburg and the N2 in Durban, near Chatsworth, demanding petrol prices be decreased. Motorists also blocked part of the N2 south, at the Higginson highway, and the R102 near Tongaat, north of Durban.

Pappi convenor Visvin Reddy, a KZN politician, said the group had organised teams in Gauteng, North West, the Eastern Cape and the Northern Cape, and said all provinces would have arrangements made by July 27.

“We are working on … key roads and infrastructure we will be blockading. It is going to be an unprotected strike and, for sure, we will be speaking to people in the next two weeks. We are all responsible people who do not want to endanger people’s lives.”

He said the organisation was formulating strategies to make sure protesters could allow emergency vehicles to use the roads.

SAPS spokesperson Vishnu Naidoo said police had taken note of the “threat” and urged South Africans to exercise their democratic rights responsibly. He said the police would put measures in place and their actions would be informed by their intelligence gathering as no forms of violence, disruption, destruction or intimidation would be tolerated.

Reddy said the motivation was that government could afford to bring down fuel prices. He claimed fuel could cost R8/l if Sasol were to reduce its price and cut down on exports.

Economist Dawie Roodt said trying to force government to reduce fuel prices was unlikely to work because taxes, the only aspect of the fuel price under government control, could not realistically be reduced unless taxes were raised in other areas.

“The fuel price is so high because of international oil prices and a weak rand. Taxes are the only thing government can control but if you reduce taxes on the fuel, we will have to use VAT to fill the void or create some other tax. According to our calculation, we would have to increase the VAT by 5%.”

Roodt added the only other way to cut the fuel price was to adopt and implement better macroeconomic policies which would increase confidence and make the rand stronger.

Estimating the effect the protest would have on the economy, Roodt suggested the country could be hit significantly. “This is a rough calculation, but it would cut economic growth by 0.01%. It doesn’t sound like much but it actually is a lot.”

While the protest will technically sabotage the economy, an attorney at Jurgens and Bekker, Andrew Boerner, said South Africa’s legal framework was insufficient in holding people who committed such acts accountable for the economic damage.

It would likely be policed at municipal or metropolitan level as an act of public disorder and depending on whether any violence was involved, protesters could be charged on that basis.

The issue, he emphasised, was that it would be difficult, legally, to connect the actions of the protest with the slowdown on economic growth. “The law is always concerned with legal nexus – whether there is a link between actions in questions and [supposed] repercussions,” he said.