DA leader Mmusi Maimane shared protesters' sentiments, saying the high fuel price is not out of government's hands, as it claims. 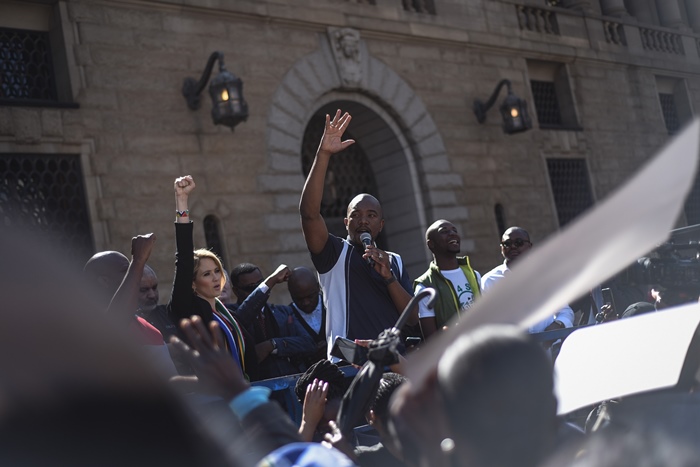 Government was lying when it claimed fuel hikes were only influenced by the currency exchange rate and it would be “kicked out” next year should it fail to address the recent fuel hikes.

This was the message at yesterday’s fuel levy hike protest in Pretoria, when the Freedom Movement, led by Mmusi Maimane, leader of the Democratic Alliance (DA), picketed outside the National Treasury at Church Square.

Hundreds of people with placards demanding the removal of the “tax attack” on consumers’ pockets, and stating the “fuel levy was too heavy”, turned up. They were joined by various organisations, including the Freedom Front Plus, and the African Christian Democratic Party.

The supporters were also angered by the taxi fare increase announced yesterday, which was one of the results of the recent fuel hikes.

Motlatsi Maake, an unemployed resident from the Lethabong informal settlement, east of Pretoria, told The Citizen she would not again be voting for the ruling party if they continued to tax those living in poverty.

“I have children that I have to support and I am unemployed. I live in a shack, and our informal settlement has no water or electricity. We don’t have anything but they want us to pay. How must we pay for taxis when everything keeps going up? I won’t vote for them next year. The ANC needs to take a step back,” she said.

Maimane shared those sentiments, telling supporters that they are often left with “too much month at the end of the money”.

“You can’t milk South Africans any more. Enough is enough. Where is the money coming from? We don’t need SAA because it only flies the rich anyway. Sell the airline. Let’s take the money and make sure our people can be assisted,” Maimane said.

He said government lied about the fuel levy being out of their control as neighbouring countries like Botswana, Lesotho and Swaziland have cheaper fuel prices, even though they are supplied by South Africa.

“So, no, it is not out of government’s hands. It is very much within their control, and if they refuse to lower this tax, then you have every right to demand answers,” he told supporters.

Meanwhile, the South African National Taxi Council (Santaco) announced an increase in taxi fares yesterday, saying the decision was due to the petrol hike.

Local distance taxis will go up between R1 and R10 while long-distance trips will increase between R1 and R20. The fares will however be reviewed in June next year, said spokesperson Thabisho Molelekwa.

“Unless these increases are effected, many taxi operators will struggle to stay in business,” Molelekwa said in a statement.