SA may finally be marching towards solutions to sexual violence

Gender based violence should not be addressed only once it has happened, by jailing offenders. Prevention is just as important. 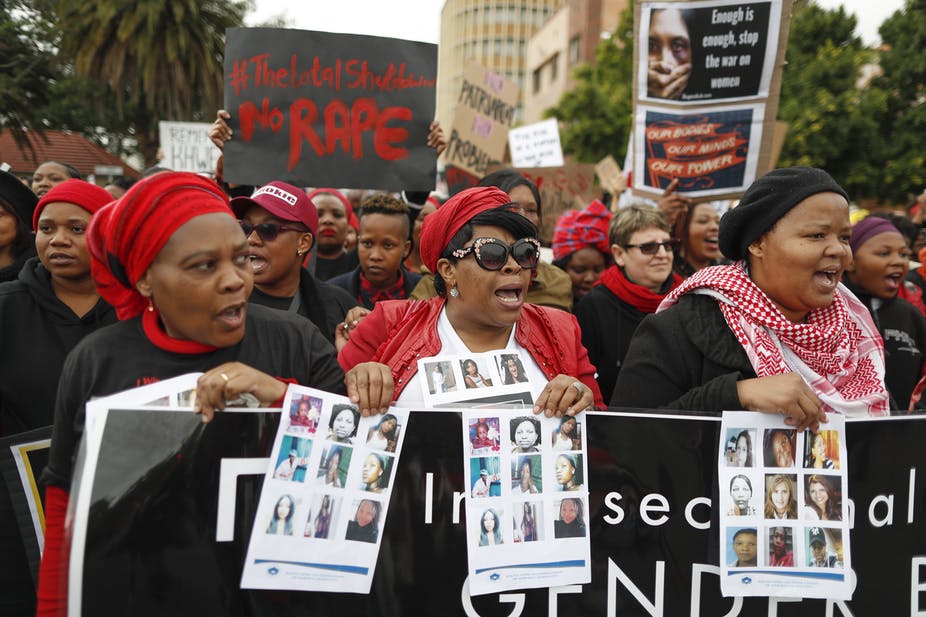 South African women march against high levels of gender based violence in the country. EPA/Nic Bothma

The start of Women’s Month (August) in South Africa this year was refreshingly different from other years as women took to the streets in #TheTotalShutdown protests. It saved the country from the yearly hackneyed speeches by politicians about women’s empowerment.

The marches reminded South Africans of women’s protests that took place during the country’s transition period between 1992 and 1994 under the banner of the Women’s National Coalition. At the time women were demanding to be included in the negotiation process and in designing the architecture of the new democracy.

In the decade that followed activism around women’s issues became limited to campaigns that were smaller in scope, such as the Shukumisa Campaign that engaged the state around the Sexual Offenses Act, or the One in Nine Campaign which proclaims that only one in nine rapes are reported. There has also been NGO activism.

Five years ago when the country was shocked into action after the brutal murder of Anene Booysen. The 17-year old was gang raped, disembowled and left for dead in a small town called Bredasdorp in the Western Cape province. The brutal nature of the attack led to a country-wide outcry and was featured on the front pages of newspapers.

This campaign was short-lived, but it emphasised the need for state intervention that did not happen. Three years later, in 2016, protests erupted at universities across the country as students took gender based violence to the streets. The #EndRapeCulture protests were led by women at universities and was, in my view, South Africa’s #Metoo moment – even before #Metoo happened globally.

The #EndRapeCulture exposed the insidious nature of sexual violence, men’s entitlement and women living in constant fear of being raped or sexually brutalised. It was a resistance against the normalisation of gender based violence.

Then the issue once again fell away from public attention – until recently, when women began mobilising for the #TheTotalShutdown protests. This was the first time activism on a national level focused on gender based violence, not only against women but also against members of the LGBTIQ communities.

This activism was long overdue. Not only did the protest marches foreground sexual violence; they also attempted to change the binary view of sex as male and female.

The #TheTotalShutdown has 24 demands in its memorandum. None of these are really new, but they are the reiteration of requests that have been made again and again in the hope that something will change this time.

The most important demands are:

Women have been asking for a great deal of what’s on the list for more than a decade.

So why has there been no action?

There’s clearly a lack of political will to deal with sexual violence. This starts with state agencies such as the police that often trivialise women’s reports of rape, are quite lethargic to investigate rape and often are complicit in rape themselves. This needs to change.

South Africans need to know how police are trained to deal with victims of sexual violence.

The large numbers of women who took part in the #TotalShutDown marches showed that women are not only victims. They also have agency. Their decision not to allow men to participate was so that women could take a stand without men taking charge. Men can show solidarity through working with other men, and by challenging men who are involved in violence.

rapists should rot in jail.

Violence should be dealt with not only once it has happened but should also be prevented. How many more women have to get raped or lose their lives before South Africa develops interventions that will not put the burden of responsibility on women’s shoulders?