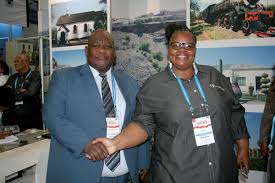 According to Babuseng, the past few days have seen “serious allegations” come out regarding “criminal conduct” in the Northern Cape provincial government’s handling of the event.

HOW CORRUPTION KILLED SKATEBOARDING IN THE NORTHERN CAPEPART ll: THE NOT SO MAGNIFICENT 7Part l of “How Corruption…

The allegations include that department of economic development and tourism CFO Kuberin Packirasamy attempted to extort money several times from the World Skateboarding Grand Prix, and that Packirasamy “would brag about the money he has received in kickbacks from previous government tenders”. He has also been accused of trying to avoid investigation by the Hawks.

Other allegations against Packirasamy include that he established a “patronage network” around the event, using his influence as chairperson of the bid adjudication committee to award tenders to his preferred vendors.

Packirasamy also allegedly exerted pressure on World Skateboarding Grand Prix to use certain vendors even though they charged more and offered inferior work, which prompted event organisers to demand a partial refund.

The list of allegations goes on to accuse finance, economic development and tourism MEC Mac Jack of “changing the circumstances of a meeting in such a way that he could ask for money from World Skateboarding Grand Prix”, suggesting the department defaulted on payments to the organisers after they refused to pay him money “under the table”.

The post claims Jack announced in his budget speech that the scale of the event would be reduced, claiming financial constraints when the real reason was allegedly his refusal to extort money from World Skateboarding Grand Prix

The allegations continue to implicate provincial head of the social development department Drinie Sampson in the supposedly “criminal” activities. Sampson is accused of “creative” financial reporting, including reporting smaller amounts than were actually spent and then “reappropriating” funds from other programmes to fund the event.

An additional R11 million was allocated for the event in the 2015/16 financial year, in what the DA has questioned as possible evidence of Sampson’s corruption.

The Northern Cape government is also accused of overspending on travel and sending “bloated delegations” to attend meetings overseas. The post accuses the delegates of “either drinking, shopping or trying to buy prostitutes” during the trip.

It is alleged a delegation for one of these meetings was sent to New York, flying business class and then not even attending the meetings there.

The DA has called on those implicated to step down or face disciplinary action.

Attempts to contact Packirasamy, Sampson and Jack had proved unsuccessful at the time of publication. We will continue to attempt to contact them to allow them to give their side of the story.