Controversy surrounds the coffeehouse franchise in the wake of allegations that a manager was sacked because customers did not want to be served by a black manager. 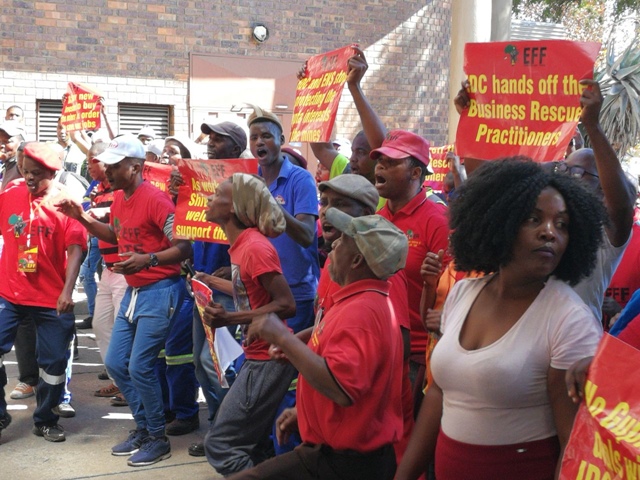 FILE: EFF members and mineworkers outside the IDC head office in Sandton, Johannesburg, 9 May 2018. Picture: ANA

The Economic Freedom Fighters in the Cape Town metro have given Mugg & Bean an ultimatum to reinstate a manager who was allegedly dismissed because customers did not want to be served by a black manager.

Andile Bozo was a manager at the Waterstone Village Centre in Cape Town, according to reports.

Atleast we have given you a clear timeline. You MUST reinstate the BLACK employee before this coming friday(17-Aug-2018). Or else all @Mugg_and_Bean stores will know us better!

The EFF in the metro demanded that Bozo be reinstated before Friday, August 17, or all hell would break loose.

According to a tweet from the red berets, they planned to do to Mugg & Bean what they did to retail outlet H&M if Bozo was not reinstated by August 17. “We will do more than we did! Be Warned!” read the tweet.

We will do to you @mugg_and_Bean what we did to HnM if you do not reinstate the black manager before the 17-Aug-2018. Actually we will do more than we did! Be warned!

Mugg & Bean has in place clear codes of conduct and policies for governing the conduct of all staff and franchisees. Please see our full media statement, regarding this matter at: https://t.co/eZaooa1mx3.

Mugg & Bean issued a statement saying they would follow clear codes of conduct and policies on the matter.

“Mugg & Bean has in place clear codes of conduct and policies for governing the conduct of all staff and franchisees. In addition, we respect all relevant labour legislation and best practice as appropriate to our business. We subscribe to a policy of zero tolerance to racism in any form, anywhere in our business. We regard ourselves as a truly South African brand striving to promote equal employment opportunities and catering to all consumers in this country.”

A hearing on the matter is scheduled for August.

The rest of the statement reads:

In terms of the dismissal of the employee in question, and subsequent to an extensive internal investigation and due process followed, this matter has been submitted to the CCMA – the hearing will take place in August.

The matter is also the subject of a court hearing scheduled for September and we are therefore not in a position to comment further in this regard.

Mugg & Bean management would like to assure you that the rule of law will be observed and complied with.

Reactions on Twitter suggest some of the franchise’s customers want nothing to do with the outlet.

#BoycottMuggnbean @Mugg_and_Bean disgust me….after so long there are still businesses that have the "white only" rule ????…..i don't see myself spending a cent in you…..nx

We want to know if the manager will get his job back. But @Mugg_and_Bean keeps repeating themselves like a broken record. We shall boycott your racist business. We shall spread the word until you take us seriously. #BoycottMuggnbean

Bozo has now lodged a case of unfair dismissal at the Commission for Conciliation, Mediation and Arbitration (CCMA).

According to the employee, who started out washing cars and worked his way up to the manager position, a new owner who took over the franchise in December embarked on a process of replacing as many black employees as possible with white ones.

“The first thing he wanted to know was why the store had no white waitresses and waiters, and I told him they had quit. He then employed two girls, but after three months they also left,” Bozo said.