DA maintains Trollip’s ousting was unlawful, will head to court

With the help of one rogue DA councillor on Monday evening, the former opposition declared they had ousted the DA coalition, but the DA disputes this. 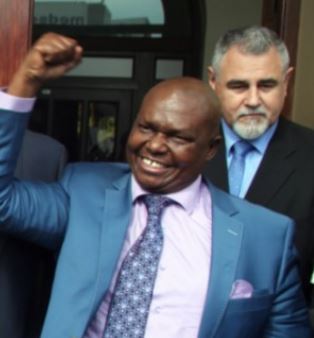 On Monday evening, the opposition was reportedly, according to The Herald, able to form a quorum of 61 to have an ANC candidate elected the new speaker and the UDM’s Mongameli Bobani the mayor after the removal of the DA’s Jonathan Lawack as speaker on Monday morning.

However, the DA maintains that this move was unlawful as Nelson Mandela Bay city manager Johann Mettler adjourned the council meeting because the council was not quorate, in his view, and could not elect a new speaker.

“The DA council left on the basis of the advice I received that there was no longer a quorum present and that the meeting couldn’t continue, and a new date was set by myself [as acting speaker].”

The DA will be challenging everything that happened after he adjourned the meeting, he said. It’s understood the party is already preparing a court interdict against the new government in the city.

In the initial absence of a speaker, the meeting was presided over by the department of co-operative governance and traditional affairs’ representative, Jenny Roestorf.

After taking her seat as speaker, Mafaya immediately turned to electing a new mayor for the city. Athol Trollip was removed as the mayor in absentia, with the United Democratic Movement’s Mongameli Bobani being nominated unopposed by the ANC’s Mvuzo Mbelekane.

He accepted and was duly named as the mayor.

The majority of councillors have elected Mongameli Bobani as mayor. #NMBCouncilVote pic.twitter.com/AZdxrrR9xv

The Citizen understands that the former opposition was only able to reach a quorum by including the vote of DA councillor Victor Manyati, whose membership of the DA and his council seat are still in dispute.

Bicks Ndoni was elected chief whip, while the mayoral committee was made up of the following councillors:

The DA’s coalition government with Cope, the ACDP and the Patriotic Alliance (PA) was on the back foot on Monday morning after Manyati said he would side with the opposition to unseat the speaker of Nelson Mandela Bay and the mayor.

The DA fought back by quickly revoking Manyati’s DA membership and declaring his seat vacant in council.

Manyati was reportedly charged earlier this year for insurance fraud, and his days in the DA were understood to have been numbered anyway.

DA councillors sang a struggle song in which they referred to Manyati as a “dog”.

Manyati had told the media he was not happy with the DA and was planning to quit the party. He said, “I need change. I am leaving the DA.”

In response to this betrayal, DA provincial leader Nqaba Bhanga said Manyati was no longer a member of the party as his membership had been promptly terminated.

The DA constitution has a clause, popularly called the De Lille clause, which means any member declaring publicly that they are no longer a member of the DA shall expel him- or herself from the party in the process.

Since the PA, DA, ACDP and Cope had walked out of council, the remaining 60 opposition councillors would presumably not have been able to form a new government without a majority.

Manyati’s lawyers, however, wasted no time in challenging his expulsion from the party.

Lawyers acting on behalf of Mbulelo Manyati have written to city manager Johann Mettler saying he intends to contest his expulsion from the DA. #NMBCouncil #NMBCouncilVote pic.twitter.com/gXK5pWlLkZ

The DA’s city manager, Johann Mettler, acting as the presiding officer in Lawack’s absence, had stood the meeting down until about 3pm, during which time the DA received legal advice.

On Monday afternoon, the opposition, however, complained that the DA was too quick to declare Manyati’s seat vacant. The ANC’s Andile Lungisa reportedly said: “We cannot preside on internal issues of the DA. We cannot reduce this council meeting to be a disciplinary committee of the DA.”

Manyati himself said he was disappointed with how the day had unfolded. He claimed he had never publicly stated that he was going to resign; he claimed that he only said he would not vote with the DA on the motion.

“As far as I’m concerned I am still a councillor, this meeting must proceed.”

However, the recording below makes it clear that he categorically stated: “Yes, I am leaving the DA.” Mettler said in council that the party would be using this video evidence as part of its case against him.

DA councillor Victor Manyati says he is leaving the DA and that he is planning to vote the mayor Athol Trollip out. #sabcnews pic.twitter.com/mdSszdgaEU

By 3.30pm Mettler had left the chamber after making it clear that, in his view, the meeting was not quorate and could not elect a new speaker. ANC councillor Bicks Ndoni asked that the meeting not proceed as it was hampered by legalities.

He said the local government department would intervene to provide clarity on the way forward. Ultimately, the decision by Cogta MEC Fikile Xasa appeared pivotal in changing the balance of power in the city.