Struggling power utility Eskom is expected to submit an application to energy regulator Nersa for an average tariff increase of 15% per year for the next three years.

The application has already been sent to the National Treasury and the South African Local Government Association (Salga) for comment, as the law prescribes.

Moneyweb has seen the application.

The increase would be over and above the increases required to liquidate the R32.7 billion Nersa earlier awarded to Eskom to compensate it for lower than expected sales and higher than expected costs in previous years. This was done in terms of the regulatory clearing account (RCA) methodology.

If the RCA award is recovered over the same three years that the tariff application covers, and if Eskom’s application is successful, consumers could pay about 20% more for electricity in 2019/20, and not much less in the two subsequent years, says economist Mike Schüssler.

He adds that this would add almost one percentage point to inflation and further decrease the spending power of struggling South African consumers. The Reserve Bank would not lower interest rates due to the inflationary effect, and any economic recovery would be unlikely.

Nersa has in the past consistently awarded Eskom substantially less than it has applied for. The tariff application is essential for the recovery of its prudently incurred cost plus a reasonable return from tariffs, and the basic decision is for allowable revenue.

In a second phase, Nersa approves the specific tariffs that will apply to every customer group through which Eskom would recover the revenue.

For 2018/19, Nersa reduced Eskom’s allowable revenue to R190 billion from the previous year’s R205 billion. Eskom is taking this decision on review in the High Court. No court date has been set.

Eskom says its application provides for the phasing in of return on assets “to ensure that a significant portion of the interest cost and repayment costs are covered over the three-year period.”

It illustrates the provision for debt repayment in the following table:

Eskom states that the main factors contributing to the sharp increase in the revenue requirement over the three years are outside of its control. “The two key elements that contribute to this are the increase in debt service costs and IPP [Independent Power Producers] costs … ”

Projects up to round 4.5 of the department of energy’s renewable energy IPP programme have been included in the cost calculations.

The period will see Eskom’s debt repayments almost double from R53 billion in the current financial year to R101 billion in 2021/22, growing at an annual compound growth rate (CAGR) of 24.1%.

Operational cost grows by a CAGR of 7% over the same period, and primary energy by 12.6%.

Despite the fact that it is on the verge of concluding a wage agreement that provides for an increase to bargaining unit staff of 7.5% in the current year plus a R10 000 signing bonus, and 7% in the next two years, Eskom states that its employee cost will increase by less than the inflation rate (currently 5.1%). This will be achieved by reducing staff numbers, it says.

The regulatory asset base (asset register) has been revalued at R1 288 billion as of April 1, 2016. This forms the basis for the calculation of the return on assets and depreciation costs in the application. The 2018/19 tariff determination was based on a regulatory asset base value of R702 billion (R586 million less).

Eskom says these numbers could be revised according to the latest available data before Nersa makes its final decision about the application.

Eskom is expected to submit the application, together with the comments from the treasury and Salga, within days. Nersa will invite written submissions and hold public hearings, and is expected to make a decision in December.

The new tariffs will take effect on April 1, 2019, for Eskom’s direct customers and on July 1 for consumers supplied by municipalities. 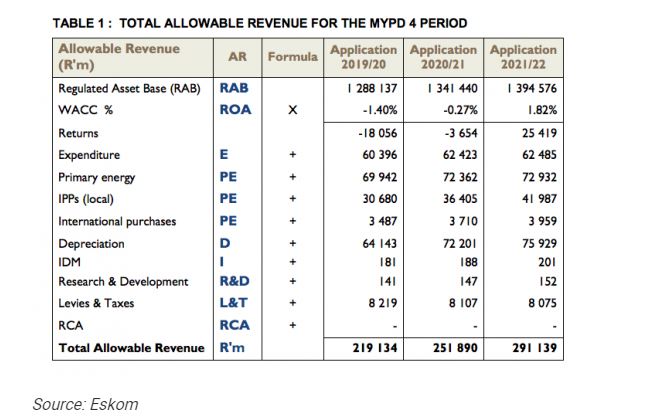