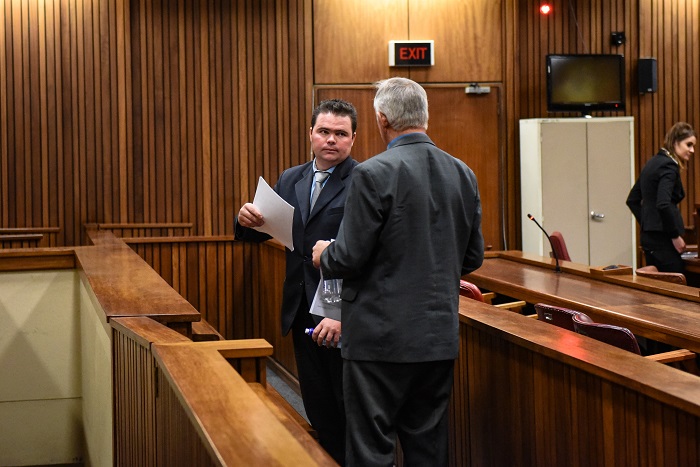 A Brits businessperson, accused of murdering a local farmer by severely assaulting him and then driving over him, yesterday told the High Court in Pretoria he had feared for his life when he fled the scene.

Building contractor Schalk Myburgh and his son Schalk Jnr have pleaded not guilty to murdering Brits farmer Muraga Mavula, claiming they were under attack and were acting in self-defence.

Myburgh Snr testified that he and his son were returning home that evening in December 2015 after working on a client’s swimming pool at a house nearby when they saw a bakkie standing next to the road with its lights on. They saw two men coming out of the bush with an animal and then two more people followed with another animal, which they were carrying by the legs, while a fifth man was standing next to the bakkie.

They suspected these people might be stealing cattle and Myburgh Jnr stopped and went over to Mavula, who was standing next to the bakkie. Myburgh Snr also got out.

He heard his son asking Mavula to come with him to the farmer to find out if these were his cattle.

Myburgh Snr said Mavula then punched his son on the mouth and he moved towards them to stop the assault on his son, pushing his hand into Mavula’s face.

Myburgh Snr said someone hit him on the back and side and all of them then fell to the ground, with Mavula falling on his back and Myburgh landing on top of him.

Myburgh Snr shouted to his son, who was lying on the ground, to try and get away and bring help, whereafter his son ran to their vehicle and drove off.

Myburgh could not remember if he had hit anyone, but he got up and ran into the veld, where he hid in a ditch until his son returned to the scene with their client. He told them they must go because there was going to be trouble.

He said Mavula had stayed behind with his bakkie when he had left the scene, but he could not see if the deceased was still conscious as he was just trying to get away.