Manyi may be cleared of wrongdoing over SMS, says Zondo

Justice Zondo also denied media reports saying those who have applied to cross-examine state capture inquiry witnesses must themselves submit to being cross-examined. 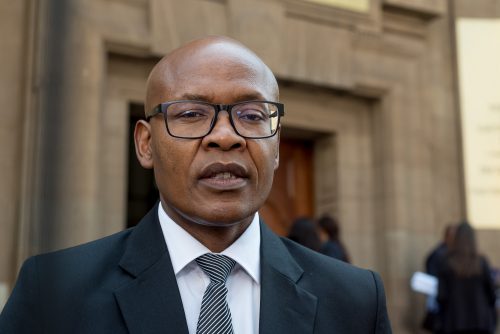 Owner of the media operations formerly known as ANN7 and The New Age Mzwanele Manyi speaks to the media outside the High Court in Johannesburg on 7 September 2017. Manyi appeared in court today over a defamation case brought against him by entrepreneur Magdalena Wierzycka. Picture: Yeshiel Panchia

Deputy Chief Justice Raymond Zondo, who is currently at the helm of the commission of inquiry into state capture, said that an affidavit submitted by businessman Mzwanele Manyi indicated that he seemed to not have intended anything wrong by sending the message.

Justice Zondo had instructed the commission’s legal team to investigate the matter after Williams told Zondo that Manyi had sent her a text message during the adjournment of the inquiry stating that she should tell the inquiry that The New Age and SABC breakfasts had not occurred during his tenure as GCIS boss.

During her testimony, Williams told the commission of how during Manyi’s time as chief executive at GCIS, the procurement department was allegedly “bullied” into hosting The New Age and SABC breakfasts even though these fell outside the GCIS’s scope, which is broadcast and print.

Upon hearing about the text message from Manyi to Williams, Zondo instructed the commission’s legal team to investigate the matter. He appeared to have come to the conclusion that Manyi was arguably not guilty of intentional wrongdoing in his sending of the SMS, but said that the issue will be dealt with “in due course.”

Just so it's clear. Phumla was relating the changes I brought into GCIS. In the same breath she mentions TNA/SABC breakfast which in my view created the impression that I was somehow part of that. So I sent her a text for her to clarify that this happened AFTER my era pic.twitter.com/j1TRvG8q1N

Zondo also sought to set the record straight regarding reports of him saying those implicated in the testimony who have applied to cross-examine the witnesses must also face cross-examination.

The Citizen reported that Zondo had indicated this in response to an application from Lakela Kaunda for leave to cross-examine Vytjie Mentor over her allegation that Kaunda had called her in 2010 to arrange a meeting with then-president Jacob Zuma.

READ MORE: Confused Mentor confirms allegations to judge Zondo. Or is that Zondi?

#StateCaptureInquiry: Deputy Chief Justice Zondo says news reports that stated that cross-examination applicants need to be willing to testify if they want to be allowed to cross-examine witnesses are false and he never said that. MDM pic.twitter.com/e881ARP7UC

Lawyers have applied to cross-examine those who have testified at the inquiry on behalf of people implicated, representing Duduzane Zuma and businessman Fana Hlongwane as well as Manyi, Kaunda, former minister Lynne Brown, and two Hawks officials. Faith Muthambi, notably, has not applied.