Parents go to court over 80+ pupils in one classroom

A number of classes even have 100 pupils per classroom, where pupils don't have enough space to write properly and teachers can't move around. 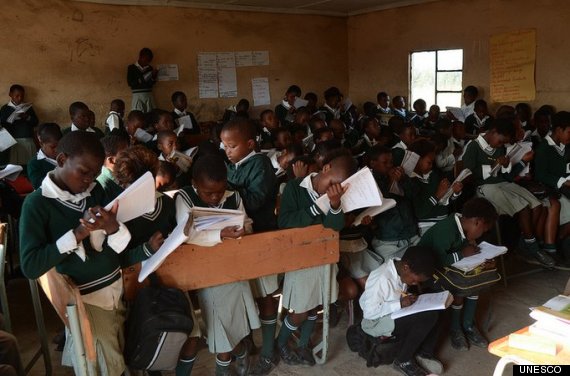 An overcrowded classroom in a rural school. Picture: Twitter

Parents from four high schools in the Eastern Cape have taken the provincial department of education to court in a bid to force it to provide more classrooms for the overcrowded schools throughout the Mthatha and Amathole districts.

According to human rights organisation Legal Resources Centre, representing the schools at Mthatha High Court, they filed court papers on August 20, in an application which seeks to force education MEC Mandla Makhuphula to submit to court plans for decreasing the overcrowding in the two districts, which have not been identified in the provincial government’s existing infrastructure plans.

The Legal Resources Centre said yesterday: “Overcrowded classrooms undermine children’s right to a basic education as enshrined in section 29 of the constitution.

Regulation 9(2) of the Regulations Relating to Minimum Uniform Norms and Standards for Public School Infrastructure puts the maximum number of pupils per classroom at 40.

According to the Legal Resources Centre the infrastructure norms, published in 2013, were meant to be phased in over seven years and required MECs to provide plans for implementation and to continually report to the minister of basic education on the progress of those plans.

The centre said, however, that available plans didn’t include provision for the applicant schools, where overcrowding had reached crisis levels.

The matter had not yet been opposed by the education MEC and had not been set down for hearing. Makhuphula’s office had yet to respond to questions sent to him at the time of going to press.

This comes after advocacy group Equal Education staged a silent protest during an event hosted by President Cyril Ramaphosa last month against Basic Education Minister Angie Motshekga’s court bid to reverse a judgment which would have forced her to eradicate pit toilets in schools.

Advocacy groups campaigned for safer toilets in schools after Michael Komape, five, died in a pit latrine at his school in Limpopo in 2014. Another five-year-old, Lumka Mkhethwa, died in a rural Eastern Cape pit toilet in March.