Evicted civilians won a victory with a court order but are still living in squalor after being evicted from a military base. 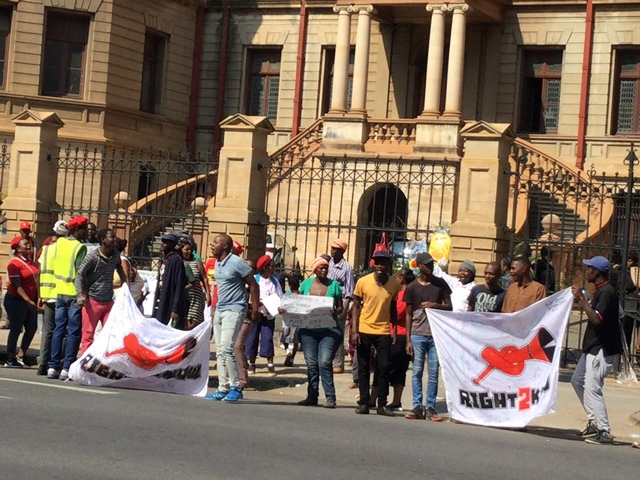 A bid by a group of civilians who were violently evicted from their homes at the Marievale military training base near Nigel last year to have the defence minister, the chief of the army and the commander of the base jailed for contempt of court will only proceed later this week.

The group wants the High Court in Pretoria to send Mapisa-Nqakula, chief of the army Lindile Yam and the commanding officer of army support base at Marievale, Colonel Mafihlwase Mkhize to jail for 120 days unless the defence force complies with a court order allowing them to return to their homes or to provide them with proper alternative housing, and to interdict military staff from harassing or intimidating them.

They will also ask the court to issue warrants for the arrest of the top brass, suspended for a year on condition they comply with the court order.

Although the minister insisted in court papers she had given the chief of the SANDF and Military Command instructions to comply with the court order and could not be personally held liable for any contempt, the villagers accused her of not appreciating her responsibilities as a minister and of gross dereliction of her duties.

Judge Norman Davis granted the order in May after the villagers, with the help of Lawyers for Human Rights (LHR) took the SANDF to court for evicting them without a court order. Most now live in squalor in a makeshift shantytown they cynically refer to as “Happiness Village” without sanitation, electricity or running water.

LHR lawyers said they remained displaced and continued to live in precarious conditions, despite the court order, and some still complained of being harassed and intimidated by military staff.

All of the homes formerly occupied by the evicted residents were apparently allocated to members of the SANDF shortly after the judgment and the SANDF then offered alternative accommodation to the community in the form of two open bungalows with no privacy or cooking facilities and with limited ablution facilities. – ilsedl@citizen.co.za

Lobbyists call for better policing instead of stricter gun laws
5 days ago
5 days ago
PREMIUM!

Lobbyists call for better policing instead of stricter gun laws
5 days ago
5 days ago
PREMIUM!