When rangers found the dead mother's calf it was so small it could fit into their chopper. 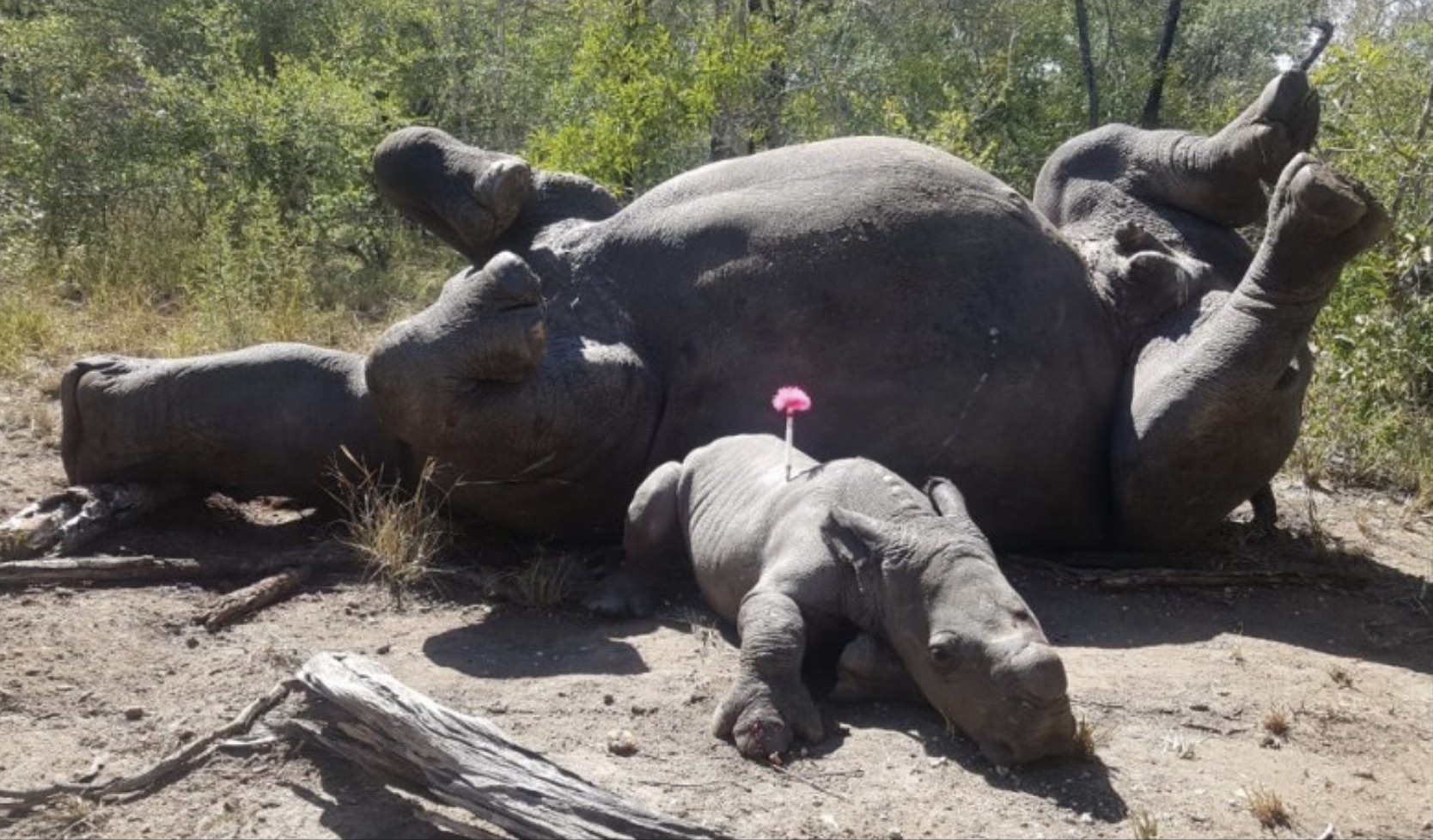 The mutilated carcass of a female white rhino, who had given birth just months ago, lay rotting on a hill beside a road that meanders through South Africa’s Kruger National Park.

Insects feasted on the 18-year-old animal, whose horns had been cut off, causing a foul smell to fill the humid air.

“We found one .458 casing and it seems like there is a bullet inside the carcass. There’s nothing else left here,” said Frik Rossouw, a senior investigator in South African National Parks (SANParks) service.

“As you can see the hyenas and vultures have done their thing.”

Rangers found her 10-week-old calf cowering nearby and airlifted it to a nearby sanctuary.

“It was so small it could fit in the back seat of the chopper,” Rossouw told AFP. Rhinos have been hunted to near extinction since the early 2000s with demand for their horns fuelled by Asian consumers who believe the keratin has medicinal and aphrodisiac qualities.

The rhino was the fourth to be killed in recent weeks in Kruger — the jewel in the crown of the nation’s tourist appeal.

Barely a mile away from the bloodied roadside scene, another rhino lay dead, leading investigators to suspect they had been killed by the same gang of poachers.

“It’s the first time we have had a crime in this area of the park so close to the main road,” said Rossouw, a seven-year veteran of the park’s detective service, as he clutched an assault rifle.

“This animal was probably shot at night — the poachers won’t take the chance because there’s movement all day here.”

Poachers typically wait for full moons and clear skies to stage their audacious raids into the park, limiting the need for electric light that could give them away to the heavily-armed anti-poaching patrols.

South Africa is home to around 20,000 rhinos, about 80 percent of the worldwide population and despite recent setbacks, the park says it is making progress in the battle against poaching.

“We’ve reduced the number of animals that are being poached from five a day and today we can proudly say that we’re standing at 1.3 a day,” SANParks spokesman Isaac Phaahla said.

Armed with an array of detection technologies — some kept as closely-guarded secrets — sniffer dogs and surveillance aircraft, Kruger’s anti-poaching force is having an impact, its foot soldiers insist.

The 54 dogs of the park’s canine unit have been at the heart of high-profile victories over the well-funded highly-disciplined poaching gangs.

Dogs are used for their acute sense of smell to locate explosives, firearms and elephant ivory — as well as rhino horn.

“But over grass is where your dog picks it up with his nose because he is following scent, not spoor. So it’s a team like that,” he added, describing canine support as a “game changer” for the park.

Air support has also been crucial in helping tackle poaching, according to Andrew Desmet who flies Bat Hawk surveillance aircraft over the two- million hectare park.

“The role of the aeroplane is to suppress, the poacher has to hide behind the trees and wait for the aircraft to leave — it will slow them down,” said Desmet.

The park is now seeking to grow its arsenal by adding the more powerful Fox Bat aircraft to its fleet — as well as growing its dog pack.

Another new front in the fight has been an increase in arrests of the kingpins who fund poaching operations — but results are slow.

“We’ve had three high profile arrests… and that shows that at least there’s collaboration with the police and it’s starting to bear fruit.”

Phaala is now hopeful that when those cases go to court, convictions and stiff penalties will follow.

In South Africa’s Mpumalanga province, which takes in Kruger’s southern half, 365 suspected rhino poachers were arrested in the first half of the year.

For those on the frontline like Rossouw, Desmet and Williams, there is hope that the war against poaching is not being fought in vain.