Protesters in ANC and EFF T-shirts pelted rocks at the court building, while people from Machadadorp blockaded the N4 highway and set a truck alight. Rubber bullet casings, bricks and angry residents filled the street outside the Belfast Magistrate’s Court in Mpumalanga yesterday, with residents threatening to burn the court after two security guards accused of beating a black man were granted bail of R500 each.

The bail verdict enraged members of the community, clad in EFF and ANC T-shirts. They had gathered outside court, waiting to hear if Bruce Botha, 29, and 20-year-old Wayne Swart would be released. 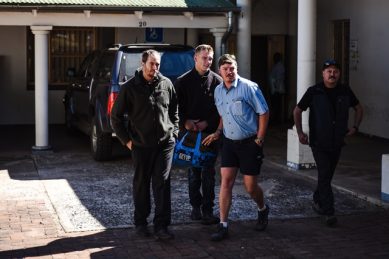 Bruce Botha (L) and Wayne Stuart (C) after being granted bail while EFF and ANC members protest the outcome of the court case, 14 September 2018, in Belfast, Mpumalanga. Picture: Jacques Nelles

Security guards Botha and Swart made headlines early this week when a video surfaced, showing them manhandling Godfrey Masuka and dragging him by his arms into the back of a bakkie.

The two accused were apparently responding to a complaint about an alleged argument involving Masuka.

While Botha and Swart were arrested for assault with intent to do grievous bodily harm, unrest broke out in the small town of Belfast, with a shop looted and torched, roads barricaded, and the burning of two trucks in the week.

As soon as Magistrate Nomampondo Harmans made her ruling, rocks were pelted at the court building, with threats to burn it. 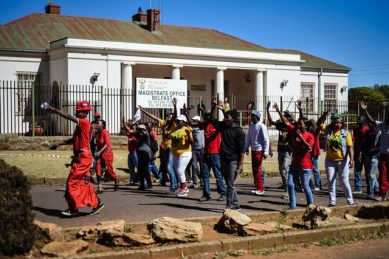 Police responded by firing rubber bullets to disperse the crowd but within minutes, the angry residents returned in numbers.

The few police officers appeared defeated when bakkies filled with EFF members arrived to join in the massive demonstration. A few fearless community members even walked up to the police to dance in front of them. 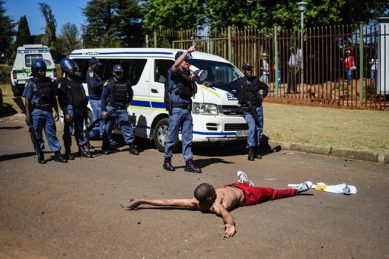 Belfast Police are seen standing by while EFF and ANC members protest at the Belfast Magistrate’s court, 14 September 2018, in the town of Belfast, Mpumalanga. Picture: Jacques Nelles

While some were seen picking up stones, behind the court building Swart, Botha, their lawyer and family members jumped into a bakkie and escaped the crowd.

EFF Nkangala region chair Poppy Moila, said: “How can two people who were attacking someone, racially at that, be given bail?

“We’re disappointed by this incident and it is heartbreaking to be dragged on the road, chained and beaten. Not only did these people beat that victim, they beat other people that tried to assist in the incident. That is very cruel.” 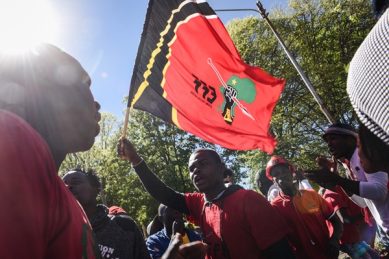 EFF and ANC members are seen protesting at the Belfast Magistrates court, 14 September 2018, in the town of Belfast, Mpumalanga. Picture: Jacques Nelles

People from Machadadorp later blockaded the N4 highway outside the town, setting another truck alight.

The state did not oppose bail as Botha and Swart had no previous convictions nor pending cases, said Monica Nyuswa, spokesperson for the National Prosecuting Authority in Mpumalanga.

The trial was postponed to September 28.

ALSO READ: The story behind the ‘racist’ attack of Machadodorp

Solidarity to UCT: Scrap mandatory vaccinations or see you in court
3 hours ago
3 hours ago

'It was just awful': Centurion man stung over 500 times by bees
5 hours ago
5 hours ago
PREMIUM!

Daily news update: Spotlight on Tembisa 10, Niehaus vs ANC and load shedding to move to stage 3
13 hours ago
13 hours ago

Solidarity to UCT: Scrap mandatory vaccinations or see you in court
3 hours ago
3 hours ago

'It was just awful': Centurion man stung over 500 times by bees
5 hours ago
5 hours ago
PREMIUM!

Daily news update: Spotlight on Tembisa 10, Niehaus vs ANC and load shedding to move to stage 3
13 hours ago
13 hours ago