What your tax bill could look like next year Despite economic pressure, revenue collection has been relatively buoyant during the first half of 2018/19. Picture: Moneyweb

National Treasury does not expect that personal or corporate tax rates or VAT will be increased over the medium term, unless the economic environment deteriorates substantially.

“At this stage, revenue projections assume no changes to tax rates, but provide for annual adjustments to personal income tax brackets, levies and excise duties in line with inflation,” it said in its medium-term budget policy statement (MTBPS) on Wednesday.

Tax commentators have for some time warned that further tax hikes may not necessarily result in additional tax revenues. In its MTBPS, National Treasury acknowledged as much, saying there is little room for large fiscal adjustments.

Finance minister Tito Mboweni stressed that the MTBPS was issued at a time of slow economic growth (Treasury revised its forecast for 2018 from 1.5% to 0.7%), lower revenue outcomes and that the budget environment was “very tight”.

Despite economic pressure, revenue collection has been relatively buoyant during the first half of 2018/19, growing by 10.7% year-on-year, but Treasury warned that the recession has started to weigh on collections.

“Weaker economic growth, alongside a once-off payment of overdue VAT refunds, will result in an in-year revenue shortfall now estimated at R27.4 billion, relative to the 2018 budget estimate,” Treasury said in its MTBPS.

It said a backlog of VAT refunds at the South African Revenue Service (Sars) and an underestimation of refunds due has led to an excessively optimistic view of revenue growth. The VAT refund estimate has been revised upwards by R9 billion, and about R11 billion will be paid out to clear the backlog in the VAT credit book.

The remaining R7.4 billion of the revenue shortfall is largely the result of slower corporate income tax collections.

Asked whether refunds were previously intentionally delayed or the result of incompetence, acting Sars commissioner Mark Kingon said the issue was open for debate. He said that while Sars never stopped paying refunds, the issue did evolve in a way he wasn’t comfortable with. He stressed that Sars’s compliance model was built on service.

The graph below shows the refunds owed to registered VAT vendors. Lower refund payments would result in higher tax collection. 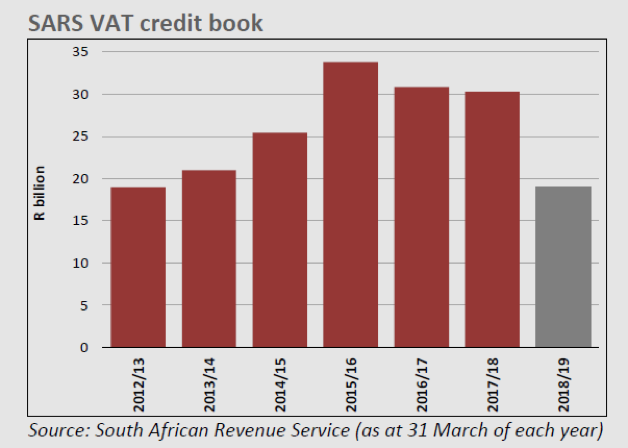 Sars data suggests that the credit book should normally be about R19 billion if verified VAT refunds are paid out immediately.

The Tax Ombud launched an investigation into delayed refund payments in 2017 and found that Sars unduly delayed payment in certain instances.

“In future, Sars will ensure that all refunds from correctly completed VAT returns are paid out within 21 working days,” Treasury said on Wednesday.