CCTV cameras ‘tampered’ with before Pretoria journalist was assaulted

During the raid, the officers allegedly broke down doors, ransacked cupboards, and assaulted Machate in front of his wife Tintswalo and three children. 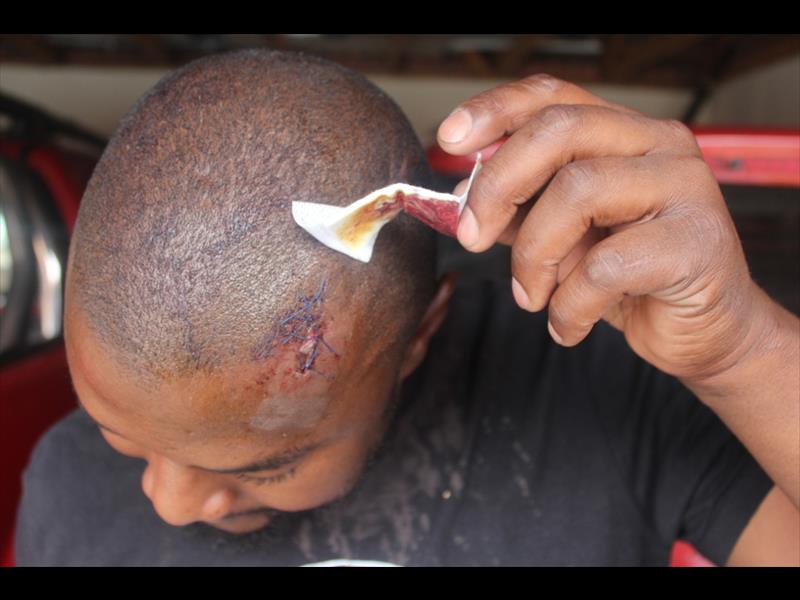 38-year-old journalist Frans Machate showing the spot on his head where he was allegedly hit with a torch. Photo: Liam Ngobeni

The CCTV cameras surrounding the house of assaulted Pretoria journalist Frans Machate were allegedly tampered with and a hard drive with video footage is missing, he told Pretoria East Rekord.

Machate, a 38-year-old Equestria resident, was allegedly assaulted in the early hours of Wednesday by a group of about 15 SAPS and Tshwane metro police officers.

He claimed that five cameras at his house were tampered with and tilted upwards during the alleged attack.

After the alleged assault, Machate was taken to the cells at Silverton police station.

“I noticed that the cameras were moved to face upwards when I returned home after being released from the police station later in the day.

“Earlier I was busy with media interviews, but when I was speaking to the IPID [Independent Police Investigative Directorate] investigators, I noticed the CCTV recorder hard drive was missing with the recorder lid opened.

“What is this? Would you say these were genuine police officers? This is thuggery. Why did they take away the CCTV hard drive and tilt up all the cameras around the house if they had nothing to hide?”

Machate said his house was a mess “with a lot of things turned upside down” and his cars were also rummaged through.

“Unfortunately, one set of my house keys, which includes the remote controls to the complex gate and my garage doors, was taken or is missing.

“Also, one of the cars I drove earlier in the day had a few bank notes. That’s also missing.”

Machate said he was concerned that his family’s security has been compromised.

“We couldn’t sleep at our house last night [Wednesday] because we are not feeling safe. We had to go to three different friends’ homes for shelter.”

He said his family could also not use any of their cars for safety reasons.

“We find this lawless and mafia-style cops’ actions very traumatising.”

He has opened charges at Silverton police station and he said a civil case against the state was imminent.

“I am still in consultation with my legal representatives on this issue. I am not taking this issue lying down.”

During the raid, the officers allegedly broke down doors, ransacked cupboards and assaulted Machate in front of his wife Tintswalo and three children, aged 13 years, four years, and two months in the early hours of Wednesday morning.

Machate said he was bashed in the head with a torch and was kicked several times before being arrested and taken to Silverton police station in Pretoria, where he was charged with “drunken driving, attempted reckless and negligent driving, and assault on a police officer”.

He was later taken to Steve Biko Academic hospital where his blood was drawn and his head wound attended to.

TMPD spokesperson Senior Superintendent Isaac Mahamba said he could not comment on issues around Machate’s house.

“If he thinks police or TMPD damaged anything to his property, then he has to report the matter at the police station and it will be investigated further,” said Mahamba.