WATCH: ‘This is how it starts,’ said ‘sangoma’ Malema of Ramaphosa in February

'It starts with friends, before we know it, Cyril's son will be running some affairs,' said the EFF leader earlier this year. 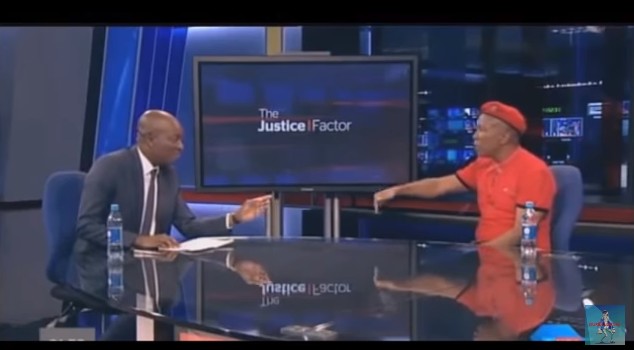 EFF leader Julius Malema’s followers on Friday asked him if he had a “sangoma calling”, following an old interview of his that has resurfaced on social media.

Earlier this year, Justice Malala interviewed the EFF leader, with Malema using the opportunity to ‘warn’ South Africans and the media against protecting then deputy president Cyril Ramaphosa.

Malema expressed his concern about some members of the Eskom board who had been appointed at the time.

The EFF leader said the appointment of former MTN CEO Sifiso Dabengwa was “problematic” because of  his “extremely close relationship” with Ramaphosa.

Malala unleashed Malema’s ‘sangoma powers’ after asking if Ramaphosa should have declared his close relationship with Dabengwa.

“No, we’re saying to the president of the ANC, we’ve dealt with these problems in the past and when we raised them we were told we were being petty. If you guys want to protect him through these friendships, go on. But we’re raising it for future purposes.

“[Jacob] Zuma didn’t destroy South Africa in a night, it started like this, I’m talking to the media and South Africans, protect him at your peril because that’s how it starts.

Watch the interview below posted on YouTube by DurbanDance:

Ten days ago, DA leader Mmusi Maimane dropped a bombshell in parliament during Ramaphosa’s Q&A session on the VBS saga.

“It was brought to my attention a long time ago and I proceeded to ask my son what this was all about. He runs a financial consultancy business and he consults for a number of companies and one of those companies is Bosasa, where he provides services of entrepreneurship, particularly on the procurement process, and he advises both local and international companies,” he explained.

However, it has now emerged that the R500,000 payment Ramaphosa’s son received from facilities management company African Global Operations (formerly Bosasa) was used to fund Ramaphosa’s presidential campaign for the ANC.

Ramaphosa has now issued a correction to his parliamentary reply – claiming he learnt that the money was made on behalf of Bosasa CEO Gavin Watson into a trust account which was used to fund his election campaign.

Following the revelation, ANC cadres, including chief whip Jackson Mthembu have been defending Ramaphosa for being “honourable”.