The party demands urgent intervention in failing municipalities to ensure their financial crises, which threaten Eskom and water boards, are resolved. 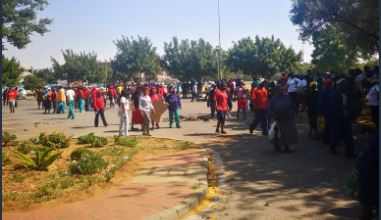 Municipal workers on strike in Matjhabeng municipality in the Free State, which includes Welkom. Picture: Twitter

The Democratic Alliance has likened the ANC-led government to a “toothless barking dog” when it comes to management and financial controls in local municipalities.

This after revelations that 12 local municipalities owed Eskom and water boards around the country a combined amount of R25 billion.

“This figure shows beyond any shadow of doubt that the ANC is dismally failing to control and manage the finances of local municipalities,” said DA shadow minister of cooperative governance and traditional affairs Kevin Mileham yesterday.

Mileham said the DA demands urgent intervention in failing municipalities to ensure that their financial crises are turned around.

“We, therefore, call on National Treasury to provide financial recovery plans for these failing municipalities.”

According to a report released by the department earlier this week, the top 12 worst offenders owe a total of R5.6 billion to water boards.

The biggest offender is the Matjhabeng municipality in the Free State, which owes Sedibeng Water Board R2.4 billion. The total money owed by all municipalities to water boards is R8.6 billion. The report further states the top 20 defaulters also owed Eskom a total of R11.6 billion.

The total amount owed to Eskom by all municipalities now amounts to R17 billion.

Some municipalities owe Eskom and water boards. The major culprits are the Matjhabeng, Emfuleni, Govan Mbeki and Nala municipalities.

Emfuleni municipality alone owes R638 million to water boards, and a further R872 million to Eskom. Milham said the shocking statistics threatens the viability and sustainability of the water boards and Eskom.