The EFF leader and his party was heavily criticised this week by the head of the same university at which he is enrolled. 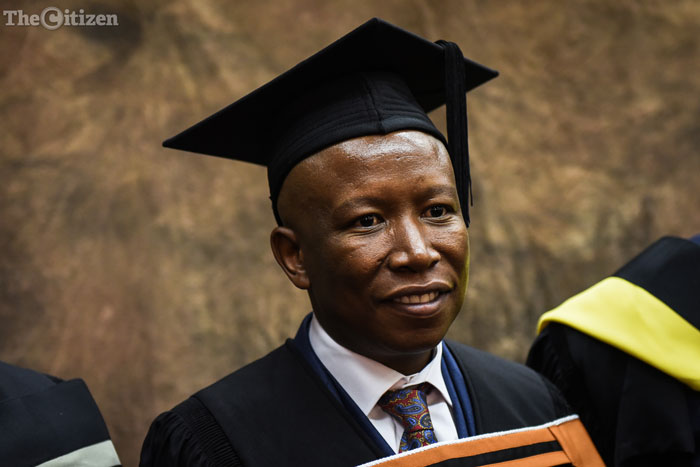 EFF leader Julius Malema is seen posing for a photograph after receiving his degree in Philosophy during the Unisa Graduation ceremony, 6 September 2017, Pretoria. Picture: Jacques Nelles

Amid all the drama surrounding allegations that he may have profited illegally from the looting of VBS Mutual Bank, EFF leader Julius Malema shared an email from Wits University showing that his master’s thesis proposal had been accepted.

He will be examining whether there is a relationship between white supremacy and Die Stem, the old South African national anthem, a portion of which has been retained in English and Afrikaans in the post-democratic national anthem.

Apparently, Malema was given academic “warnings” and “recommendations” on his research and theory, though it’s unclear what those are.

The EFF regularly extol the importance of lifelong education. Malema said in his tweet that “we continue to learn because life continues to teach”, and he called for “white supremacy” to fall.

On Monday, the vice-chancellor and principal of Wits wrote a column published in The Daily Maverick that criticised the EFF.

In it, he warned South Africans to be aware of the red berets’ “uncivil and spectacle politics”, which involved “the advancement of ethnic and/or racial politics, the public slander of individuals, threats of violence, and a social mobilisation that trashed public facilities, private businesses, and mythologised militarism.”

This, he said, started when EFF leaders Malema and Floyd Shivambu were still in the ANC Youth League supporting former president Jacob Zuma during the Khwezi rape trial.

However, EFF student command chairperson Sinawo Thambo responded to Habib in a column published on the same platform, calling him out on his apparent hypocrisy for criticising EFF leaders while praising former president Nelson Mandela and Anton Lembede.

He said it was hypocritical of him to criticise the EFF leaders while describing the older generation of the ANC as “humble, disciplined, and respectful”.

Habib responded to the criticism and said it was “interesting” that EFF leaders and supporters “confidently” commented on his role as a vice-chancellor when none of them had been one.

“Some EFF leaders have also commented on the quality of my argument and writing. Yet their remarks are so ahistorical and ignorant, one has to wonder whether they read anything beyond party memorabilia. This is the problem with politics of spectacle – it requires so little of one,” he concluded.

Habib was criticised by EFF deputy president Floyd Shivambu, who said Habib was only bitter because his “intellectual laziness and shallowness” was exposed by a student leader.

“Wits is cursed to be led by a bigoted and self-ingratiating fool,” said Shivambu.