Dumisani Gwala, facing a combined 10 charges, may be forced to represent himself at trial. 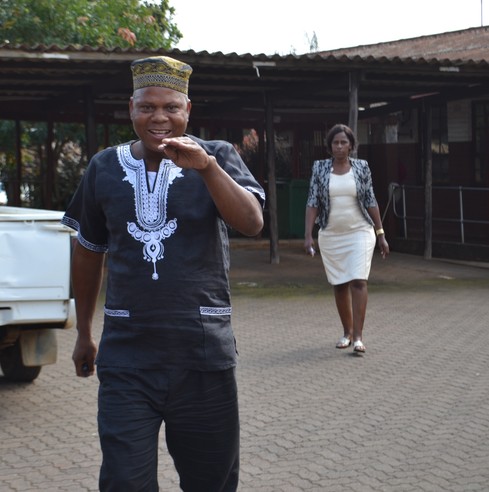 During one of his court appearances at the Ngwelezana Magistrate's Court last year, alleged rhino poacher Dumisani Gwala threatened ZO journalist Muzi Zincume when he photographed him PHOTO: Muzi Zincume

Monday marked yet another delay in the case against alleged rhino poaching kingpin Dumisani Gwala and his co-accused.

The case, which has been marred by delays for more than three years, was set down for trial this week in the Mtubatuba Regional Court, reports Zululand Observer.

However, Magistrate Zungu could not proceed with the trial as Gwala’s attorney Mpume Linda was not present.

A visibly annoyed Magistrate Zungu had to postpone proceedings to allow Gwala to contact Linda and determine why she was not available.

On resumption, resident public prosecutor Ngubane informed the court he could not get hold of Linda.

Gwala in the meantime was able to get hold of Linda, who informed the court she could come to court around noon so arrangements could be made for Tuesday for the trial to start on Wednesday.

Ngubane requested that an inquiry should be held into the matter.

“The accused used the same tactics to delay trial before,” he told the court.

Magistrate Zungu instructed Gwala to again get hold of Linda and inform her the trial would continue as planned.

“I am going to report her to the KZN Law Society. She was the same attorney that withdrew at Ngwelezana and came to this court, placing herself on record,” Zungu noted.

Zungu indicated there were several similar delay tactics employed by Gwala in the past.

The matter was initially meant to go to trial on August 4, 2015, but has since been plagued with delays.

Emphasis was placed on the fact that Gwala’s defence had changed more than four times in three years, as new attorneys were constantly hired days before the trial dates.

Zungu rolled over the matter for Wednesday with a final warning.

“Either Ms Linda will appear in court on your behalf or withdraw, in which case you will have to defend yourself because I will not postpone this matter again.

“I am advising the state to properly prepare Mr Gwala by providing him with all the necessary documents he will need if he is required to defend himself.”

Gwala faces a combined 10 charges relating to the illegal purchase and possession of rhino horn and of resisting arrest.