Members of the public who share sensitive police information could face legal consequences. 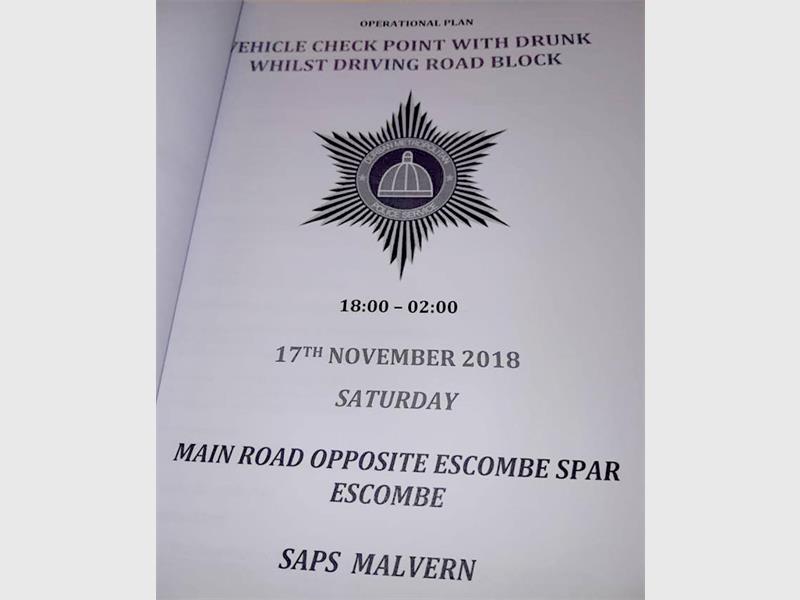 One of the pictures being shared on social media, which clearly shows a date and time of a planned police action which was to have taken place in Queensburgh over last weekend. PHOTO: Facebook

Malvern SAPS is prepared for this year’s festive season with increased vigilance by police on the streets.

Communications officer W/O Radhika Marimuthu said: “There is a heightened awareness on road safety during the festive season to keep road-users and the general public safe.”

In the meantime, people are sharing the planned roadblock timetable on social media, reports Highway Mail.

ALSO READ: When social media lets criminals get off scot-free

The Queensburgh News is in possession of a copy of a photo showing the logo of eThekwini Metro Police Service and dates and times of planned roadblocks, as well as the photo of the rota listing special duties and events for November.

Asked for comment about the sharing of these type of posts, Marimuthu said the police were investigating the incident.

In a statement, Marimuthu cautioned people against posting police activities on social media, “which can hamper and interfere with the execution of duty especially the occurrences of roadblocks”.

“Precedents in South African law have indicated that it does not require a person to be the originator of the content to be held liable – merely repeating or ‘sharing’ a post is sufficient,” said Marimuthu.

“A person may be equally liable for another person’s posts where that person knows that they have been tagged in the other person’s post and allows their name to be used, and fails to take steps to disassociate themselves from that post.

With regard to roadblocks, Marimuthu’s statement also warned against people driving drunk and trying to avoid police action by being forewarned of it on social media.

“There are innocent road-users who succumb to road accidents because of drivers who disregard the law and drive whilst under the influence of alcohol. Vagrant social media posters who defy the law and forward posts of roadblocks are not doing any favours to road-users. Instead, this is creating a culture of defiance and disrespect to the execution of the law.

“Blood-alcohol levels may not have an alcohol content of more than 0.05%.

Reddy also cautioned drivers to be responsible and not take chances.

“Rather remain where you are until you have sobered up, or arrange for alternative transport home,” she said.