One of Johann Heunis’ alleged killers pleads not guilty

The Pretoria father was shot in front of his pregnant wife and three young daughters at their smallholding in Kameeldrift two years ago. 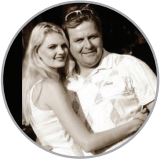 Johann Heunis, right, who was shot in front of his pregnant wife and three young daughters at their smallholding in Kameeldrift two years ago. Picture: Supplied

One of the men accused of gunning down a Pretoria father in front of his pregnant wife and three young daughters at their smallholding in Kameeldrift two years ago has pleaded not guilty to charges ranging from murder to housebreaking and robbery.

Justice Sethlangu, 37, of the informal settlement at Mamelodi East, pleaded not guilty in the High Court in Pretoria to charges relating to three separate armed robberies in the Kameeldrift area, north of Pretoria which ended with the murder of Johann Heunis.

He gave no plea explanation and chose to make use of his right to silence.

Heunis died in a hail of bullets after a group of robbers broke into the family home and opened fire on him in front of his pregnant wife, Mariandra, and three young daughters, despite him telling them that there was no money in the house and that they could take anything they wanted as long as they left his family alone.

The robbers fired several shots, one of which hit Heunis in the forehead, before fleeing, taking only two cellphones.

Heunis died at the scene. His wife gave birth to their son five days after her husband’s funeral.

The state alleges Sethlangu was part of an organised gang of robbers who broke into the houses of Dr Marti Scholtz Koen and Stephanus Lourens in the Kameeldrift area in June and July 2016 and robbed them before breaking into the Heunis home in October.

Koen testified she had just woken up when three men burst into her bedroom. One had a firearm while the other two were armed with a knife and crowbar.

The gunman repeatedly threatened to kill her, told her not to scream and ordered her to hand over her jewellery, while the others ransacked her room. She was later forced to open her safe, where the robbers took a large amount in cash and jewellery, worth about R500 000.

Koen said she became really scared after the robbers tied her up, and then lied to them, telling them she was scared for their safety as her husband and a friend were out on patrol but were armed and would return shortly.

They left with their loot after she told them to take everything and go before someone was hurt.