The businessman says he did not mean to say only 'blacks' splurge on BMWs and go to Taboo, but had meant the modern generation in general. 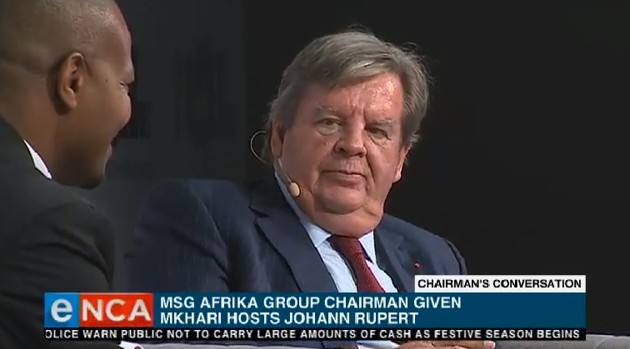 Chairman of Remgro and Richemont Johann Rupert defended himself against racism accusations in an interview with businessman Given Mkhari on Tuesday in the annual Power FM Chairman’s Interview.

Radio personality Iman Rappetti stood up during the question-and-answer session and asked Rupert how he would close the divide between his opinion of black people being consumers and splurgers and white people being the saviours of these black people.

READ MORE: Johann Rupert mocks ‘blacks’ who buy BMWs and go to Taboo instead of saving

Rappetti further made Rupert aware of the comments about him there were on social media, with some saying he was “out of touch”, while others said he was “racist”.

Towards the end of part one of the interview, Rupert had said the early “downtrodden” generation of Afrikaners from which he was descended were “driven” and had raised themselves up by “studying like crazy and saving like crazy”.

“They didn’t go and buy BMWs and hang around at Taboo and The Sands all the time, okay?”

But Rupert said he had been misquoted on his comments about BMWs and Taboo.

“What I mean is that people in my time did not do it. If people want to take it personally they have to think about what their parents gave up, and I’m saying it about everyone.

“In fact, people in the United States are doing it more. Sorry if it came across as racist, it’s not, it’s philosophy.

Rupert further said though he had been accused of being so many things by the public, he was grateful that no one had ever called him that to his face in public or private.

Rupert was highly criticised by South Africans on social media for, among other things, being “out of touch” with reality and allegedly being racist.

Even EFF leader Julius Malema thanked Rappetti for pointing out the comments made about Rupert on social media.

For @SiyaMiti, Rupert’s interview proved that “there is no correlation between intellect and wealth; tribal slurs, tribal stereotypes, racial stereotypes. You would think as someone who rarely gives interviews would give a quality interview on the rare occasion.”

These were some of the other reactions on social media:

This man is just admitting that his only fear is @EFFSouthAfrica. He doesn't fear the ANC at all.

He has mentioned the "your friends in red" from the beginning.

Imagine being so comfortable saying all of this on national TV!!! Can’t imagine what is said behind closed doors…and truth is I really don’t think he saw anything wrong with his utterances #RupertOnPOWER

Oh god. I can’t take any more of this arrogant, insufferable bullfrog. #RupertONPOWER

The casualness in which racial terms are bandied about in this interview, coupled with a slight reversioning of history & the hard questions not being asked (eg. How much land he owns? What he thinks a fair social compact would be for SA? – All boggles my mind #RupertOnPOWER

It's not about much. It's about a strategy. It's about understanding of what got us divided in the first place. Rupert saying "You Shangaans, Darkies, Vendas" with Given sitting there got me! ANC got these guys to flourish and here we are! EFF grow up & regroup. #RupertOnPOWER

The old man is just being a himself, arrogant and undermining blacks. Why are y'all surprised?#RupertOnPOWER pic.twitter.com/h1nay2b0T3

Here is a final thought:

Any white person who feels the need to tell you about his black friend Jabu or Mandla is RACIST. A clear cut RACIST.

He doesn’t see them as human being equal to the task. He sees them as black, other, less than. #RupertOnPOWER #JohannRupert

It is Black people like you given @MkhariGiven who laugh when White people are being racist. You should’ve call Johanne to order about his racist remarks.

We’re being insulted and all you do is laugh ????#RupertOnPOWER