The three corruption-accused former ministers are off the hook, with the public protector finding the allegations against them were 'unsubstantiated'. 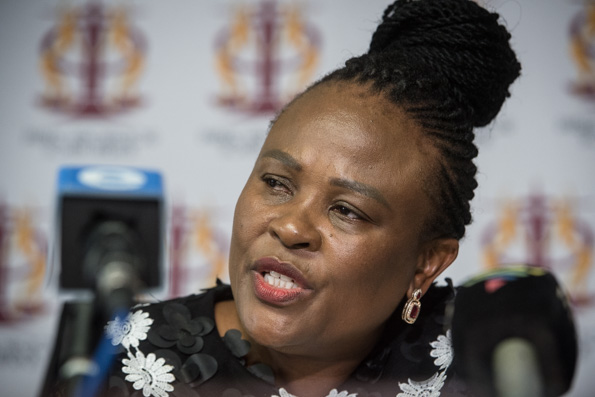 Public Protector Busisiwe Mkhwebane briefed the media on the release of several new reports on Thursday, including ones which clear corruption-accused former ministers Baleka Mbete, Faith Muthambi, and Tina Joemat-Pettersson of various allegations investigated by her office.

Mbete has been cleared of allegations that she was bribed by Invictus Gold, a black economic empowerment consortium of mining company Gold Fields.

The former National Assembly speaker was accused of allegedly receiving a bribe in the form of share allocations amounting to R25m in Invictus Gold Limited “as well as the role the department of mineral resources played in the 2010 broad-based black economic empowerment concluded with Gold Fields Limited”.

Complaints regarding the breach of the Executive Code of Ethics by former minister of communications Faith Muthambi, relating to the SABC inquiry, as well as irregular appointments by former national police commissioner Riah Phiyega were also found to be unsubstantiated.

Joemat-Pettersson was cleared of attempting to accelerate a proposed nuclear deal with Russia while minister of energy.

“We have closed several investigations on the grounds that allegations that triggered them were all unsubstantiated. We have prepared closing reports to mark the end of these matters,” said Mkhwebane.

Mkhwebane also reflected on the work her office had done this past year, saying it received positive feedback from the Auditor-General and that much of the backlog in the office was cleared.

However, the personal costs order the Constitutional Court granted against her was a low point, she said.

“The lowlight was, for me [was] the Constitutional Court judgment on personal costs. While we respect the courts and their decisions, it remains my considered view that that decision is a threat to the independence of this office,” she said.

She added that it set a “wrong precedent” and impacted negatively on the office and her work.

“We hope for a better experience in 2020,” Mkhwebane said.

She detailed a successful performance for the year, especially the clearing of the backlog.

“Seventy-seven percent of cases older than two years were finalised and, all in all, just under 10,000 out of a caseload of 14,000 were finalised,”  she said.

Still on her books was the reinstated Vrede dairy farm investigation, as well as the probe into VBS Mutual Bank, SARS, the SA Reserve Bank and Free State government website, and the Medupi and Kusile power stations.

Mkhwebane said these investigations were at advanced stages but had not yet been completed.

“I must indicate that a number of the frequently asked about investigations are at an advanced stage and reports in some of these cases are imminent.

“The matters in question include the Vrede Integrated Dairy Project and the VBS Mutual Bank matter,”  Mkhwebane said.

She added: “There is also a pending investigation on the role of the South African Reserve Bank in the whole VBS saga.

“We are experiencing challenges with this one because the bank seems to believe that we do not have jurisdiction over it. They seem to have misinterpreted the Constitutional Court judgment on personal costs,” she said.

Matters involving SARS, the departure of Jonas Makwakwa from SARS, the Kusile and Medupi power stations, independent power producers, the Giyani Water Project and the alleged irregular procurement of services by SARS from BB&D were still in progress, she said.

Further, allegations that former Johannesburg Mayor Herman Mashaba abused his power and allegations of fruitless and wasteful expenditure against the City of Johannesburg were unsubstantiated.

Matters the public protector found to be substantiated included those involving the department of correctional services, maladministration in the Mpumalanga department of education, RDP housing matters, human resource matters regarding the Independent Development Trust and home affairs matters.

“The findings and remedies in these reports are not about the public protector but rather a way of bringing justice to complainants while also plugging the gaps we see in state institutions’ governance systems so as to avoid recurrence,”  Mkhwebane said.

At the briefing, Mkhwebane painted a positive picture, saying that when she reflected “on the year that was”, she felt her office “recorded major wins but also suffered a minor setback”.

READ MORE: Mkhwebane was ‘not honest’ in her SARB / Absa report, ConCourt rules

In July, the Concourt upheld a ruling at the High Court in Pretoria finding that the entire report was flawed and should be overturned.

The High Court in Pretoria had overturned the report in February 2018, saying it showed a “reasonable apprehension of bias” and ordering Mkhwebane to pay 15% of the SA Reserve Bank’s (SARB) legal costs, while the office of the public protector was ordered to pay the remaining 85%.

Her report, released in June 2017, accused Absa (previously Bankcorp) of having illegally gifted the SARB with R1.125 billion in “misappropriated public funds” under the apartheid government in the 1980s.

She also cited her office’s other victories at the briefing, which, according to her included her office reducing irregular expenditure by R16 million; the groundswell of praise she said her office received for a report on Toyota affecting the taxi industry and commuters; and various successful investigations by her office which had helped South Africa’s most poor and vulnerable. She said her office has issued 46 reports in the past year.

She admitted that she occupied a challenging position.

“Sometimes it looks easy from the outside looking in. It’s only on the inside, in the thick of things, that you realise this work is not the proverbial bed of roses,” she said.

Discussing the imminent appointment of her new deputy, she said she hoped the new deputy public protector would have “a thick skin to withstand everything that is coming our way”.