Deputy President David Mabuza is due to answer questions in a virtual sitting of the National Assembly, with Eskom seemingly a hot topic. 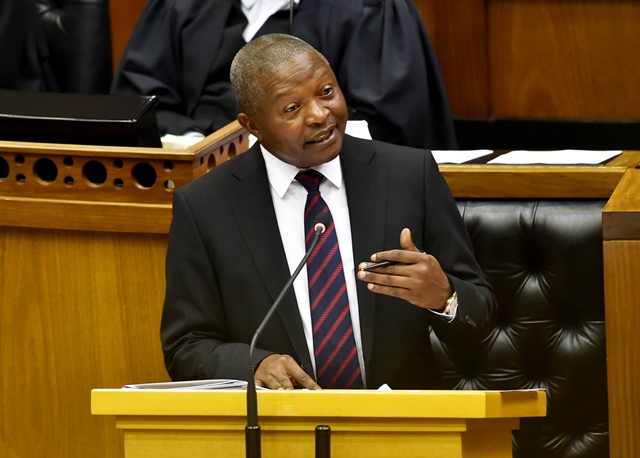 While Deputy President David Mabuza has maintained a low profile since the country entered lockdown – MPs were even concerned about his whereabouts – there will be no hiding place for him on Thursday.

Mabuza is due to answer questions in a virtual sitting of the National Assembly, with Eskom seemingly a hot topic, and a question about the controversial National Coronavirus Command Council also coming his way.

The questions which Mabuza will be asked are as follow:

“In view of his position as chair of the task team on Eskom that recently considered the issue of outstanding debts to Eskom, the Eskom build programme of new power stations and the implementation of the emergency programme that will allow the entity to procure additional capacity in the context of the economic challenges imposed by the Covid-19 pandemic, what is the government’s plan to ensure the long-term sustainability of Eskom so that it contributes to the recovery of the republic’s economy and how is the task team planning to resolve the issue of debt owed to Eskom, particularly by municipalities and other state institutions?”

“What are the details of all contributions he has made as the leader of government business to debates of the National Coronavirus Command Council during the Covid19 pandemic, especially relating to ensuring that members of the Cabinet still attend as a matter of urgency to their parliamentary business and the programming of parliamentary business initiated by the executive, which includes the possible fast-tracking of any legislation during the second session of the Sixth Parliament?”

“Whether he had read Eskom’s internal report that cleared a certain person of allegations of corruption, dishonesty and abuse of power; if not, why not; if so, was he satisfied that the investigation was conducted independently and what are the reasons that the person was not suspended when the allegations were made and the investigation was underway to ensure that there was no undue influence as is the practice?”

“With reference to his responsibilities as the leader of the SA National AIDS Council [SANAC], and in light of the escalation of reported cases of gender-based violence during the national lockdown to curb the spread of Covid-19, what impact has the ‘She Conquers’ campaign, which he referred to in his closing remarks to the plenary of the 9th SANAC conference meeting in Durban on 14 June 2019, had in empowering and educating young girls and women about their health and safety during the lockdown and how accessible has he found the campaign to have been to young girls and women across the republic, particularly to those in remote areas?”

“What measures will he take in leading the social compact to ensure that the matters on electricity in respect of affordability, debts, mobilisation of resources, fresh capital injection into Eskom, etcetera, as listed in the State of the Nation Address by the president, Mr MC Ramaphosa, is actionable and prioritised accordingly and focus is shifted to assist and strengthen municipalities to recover the debt owed to them for services delivered in order to enable municipalities to repay their debts to Eskom and water boards?”

“Whether he has co-ordinated any government programmes to accelerate agricultural support and/or taken any measures to support commercial farmers since the declaration of drought as a national state of disaster on 4 March 2020?”

In the past, Mabuza was often confronted at these sessions by DA and EFF MPs about allegations of corruption against him, with him challenging his accusers to lay charges. The EFF has, seemingly, warmed to him of late.

The virtual sitting is scheduled to start at 14:00.