Ramaphosa also touched on the late king's reported disdain for corruption and how it affected the lives of the people in the mineral-rich area. 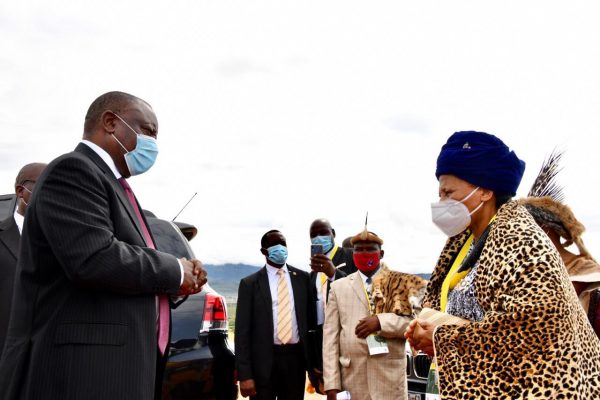 This according to President Cyril Ramaphosa, who was speaking at the Official Funeral Category 1 funeral of the king on Sunday where he implored those in attendance and those watching to not let the king’s dreams die with him.

Ramaphosa sang the praises of the monarch by highlighting all the causes close to his heart and the projects he was working on in an effort to change the lives of his people.

“Let his dreams not die with him. Let us not bury the vision that he had with him. Let the unity that he championed live well beyond his brief but promising reign. May all his economic initiatives be sustained. May they become his legacy, and may they build the just and prosperous Bapedi nation of which he dreamed,” said Ramaphosa.

His Majesty passed away on Wednesday, 6 January 2021, at the age of 40 – hardly a year after being inaugurated as the Bapedi king.

He was laid to rest in Sekhukhuneland in Limpopo.

His appointment as king came after what Ramaphosa described as “many years of strife,” before adding that “just at the moment when harmony had returned, the Kingdom is once again engulfed by a very dark cloud”.

The president described king Thulare III as someone who was youthful, visionary, promising, farsighted and full of life.

Ramphosa went on to lament how the current threat posed by the Covid-19 pandemic had robbed the nation of an opportunity to give the king a proper burial as Covid-19 safety protocols had to be observed by limiting the number of attendants, relying on virtual platforms for others to show their respects, and implementing social distancing at the funeral.

He once again highlighted the dire situation the country finds itself in before looking to the future.

“In the coming weeks and months, we will begin a mass vaccination programme that is expected to significantly reduce infections as it reaches more and more of our people. We will also increase our efforts to rebuild our economy, restoring the jobs that have been lost and providing support to struggling households,” Ramaphosa said.

According to Ramaphosa, Kgoshikgolo Thulare would have been part of this effort, working in partnership with government, business and unions to bring investment and infrastructure to his area.

“He would have supported the mass employment programmes that are now rolling out in many parts of the country, providing valuable services to our people.

“Kgoshi Thulare set out to lead his people on a path to economic prosperity. He brought experts together to chart a new economic path for Ga-Sekhukhune, with a strong focus on youth empowerment. He would say, ‘I am still youthful, I still have the agility’.”

Ramaphosa also touched on the late king’s reported disdain for corruption and how it affected the lives of the people in the mineral-rich area.

“At the onset of his reign, he declared himself a sworn enemy of corruption, which he knew deprives his people of the resources that are rightfully theirs. He wanted every member of his nation to benefit from all the economic activities and all the opportunities in their area.”

It is for this reason that the king was considered a shining example of traditional leadership in Ramaphosa’s eyes, thus leading him to plead with all those in attendance, both physically and virtually, to not the let king’s dream die with him.

READ NEXT: Funeral parlours feel the sting of the pandemic